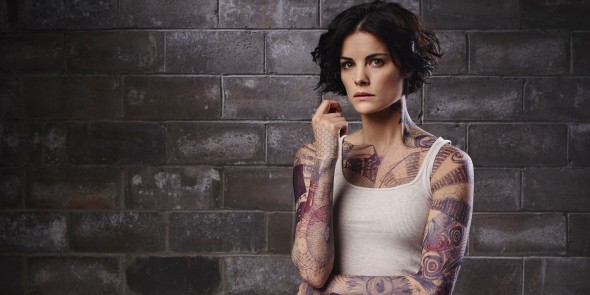 Earlier today, we reported that NBC had renewed Blindspot for a second season. Here’s the official press release which offers some additional details:

With Sullivan Stapleton as an FBI agent who’s not to be messed with and breakout star Jaimie Alexander now firmly established as a TV leading lady, “Blindspot” has proven to be both a ratings and critical smash. Since its Sept. 21 launch, the series has dominated the 10 p.m. Monday timeslot.

The Wall Street Journal says “Blindspot” manages to exert instant powers of seduction and keep a viewer rapt,” TV Guide says the series is “a sleek and exciting showcase for Jaimie Alexander’s elaborately inked ninja,” the Los Angeles Times writes that “‘Blindspot’ comes out of the box (or that darn bag) with tantalizing, high-energy grace” and USA Today calls it one of the top five shows of the fall.

“We are over the moon with the success of ‘Blindspot,’ and want to thank our producers and amazing cast for creating one of the most riveting shows on television. Jaimie and Sullivan have done an amazing job of ratcheting up the tension each week in trying to unravel the mystery of Jane’s tattoos,” said Jennifer Salke, President, NBC Entertainment. “We literally can’t wait to see what the second season will bring.”

“Blindspot” is averaging a 3.7 rating, 12 share in adults 18-49 and 12.7 million viewers overall so far this season, according to “most current” averages from Nielsen Media Research through the season’s opening six weeks, making it the #1 new series of the new fall season in 18-49. “Blindspot” is undefeated in the time period so far this season versus its broadcast competition in adults 18-49 and is outrating its ABC and CBS competition combined in that key demo.

A beautiful woman, with no memories of her past, is found naked in Times Square with her body fully covered in intricate tattoos. Her discovery sets off a vast and complex mystery that immediately ignites the attention of the FBI, who begin to follow the road map on her body to reveal a larger conspiracy of crime while bringing her closer to discovering the truth about her identity.

What do you think? Do you like the Blindspot TV series? Do you plan to stick with it?

Blindspot is the only show I watch on tv. It is the best show I’ve seen in a long time and way better than any reality show now playing. It’s like the a-team for the next generation. I love it!

Great show! Yes, we intend to watch it. When will it return (on what date)?

I’m glad that Blind spot was renewed for
The second season.

Blindspot is a very entertaining show. Love the action and the body puzzle. Keep it up and keep it on. Adult viewer need something more than terrible reality shows.

Blind spot is my favorite show on tv… I just have to record it so I can watch it the next day. The mystery of all the tattoos and the fortune telling with the tattoos if facinating

I really like blind spot They have Excellent drama

This is my fave new show. I love the puzzles, the mystery and the entire cast. Knowing the tattoos are just part of an even bigger mythology/mystery has me glued to my seat.

Blind spot is my favorite show and like
characters and the time that Blind spot
is on.

Blindspot is my most favourite new show, and I am thrilled that he was renewed for a second season.

I like the series but am disappointed in Sullivan as the lead actor. I believe that a much better actor should be playing the role. I will continue to watch until it becomes just another cops-and-robbers show.

I’m so glad that they are ordering another season. I can’t wait to see how Francois Arnaud’s (The Borgias) character plays out in this show.

I’m so happy that NBC made the right decision and with blind spot it is an excellent show I love it my brother loves and everybody that I know loves the show just keep the seasons coming even the next season after that so we have season 3 Thank You NBC.

Love the show, but the music is terrible, can hardly hear the words. turns me off to watch. It is a shame.