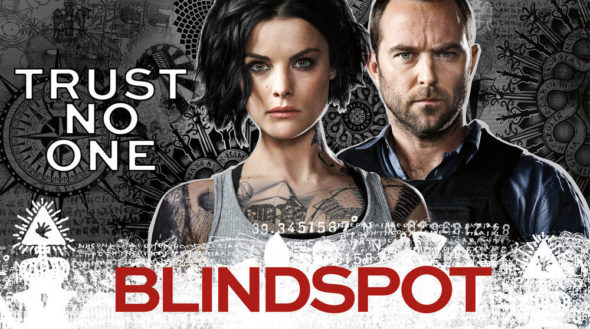 A good show early in season one went bad in season two and can now strive for even worse storylines and ratings next year.

very happy that there will be a season three.Ilove this show very much.

Blindspot is the best show ever

So thrilled to hear Blindspot is being renewed! Love this show!

I am so relieved and thrilled Blindspot has been renewed. It is a great show with an excellent storyline. Thanks!
Am disappointed, though, Timeless was cancelled. You could learn history from that show in a fun way for kids.

Hey jose, what you mean by hidden messages?

If Jose doesn’t mind, I’ll answer the question with regard to the “hidden messages”. If you’ve ever looked at the episode titles and wondered what they meant, then you’ll be happy to know that each episode title is an anagram.They’re designed to be solved by the viewer to give a clue to what each episode is about. You can rearrange the letters to form a completely different title and verify if you’re correct by going to one of the many websites that have solved the puzzle.

Yaaa !!! I was so worried, it’s my date-in night with my hubby! We just love this show!

I’m so happy. It’s one of the best on TV this season. Sorry about Rosewood. Wish it wasn’t canceled.

You just made my day!! I love Blindspot and I am thrilled that it has been renewed. I look forward to each episode with excitement….and I’m never disappointed. Thank you!

I am so glad they’ve renewed Blindspot, it’s one of my favorite shows!! They’ve canceled so many good ones to keep duds. Glad they didn’t do it this time. Now we have to hope it’s stats improve for next season!

This is wonderful! It’s one of my favorites

Ratings would probably have stayed better if the powers that be at the Network didn’t move it from its original Monday night time slot. Just like Fox and the cancelled Rosewood that was moved around the big boys have no idea what’s going on.

You’re right, but they moved it so that Timeless could be there and have The Voice give it a boost. Unfortunately, it didn’t help. Timeless ended up doing a live ratings average of a 1.10 for 16 episodes, which isn’t very good.

I don’t need another show in front of the one I want to watch. People can just turn when they want.

it was losing viewers Mon at 10 as well. and had already gone fractional there so moving it made little difference