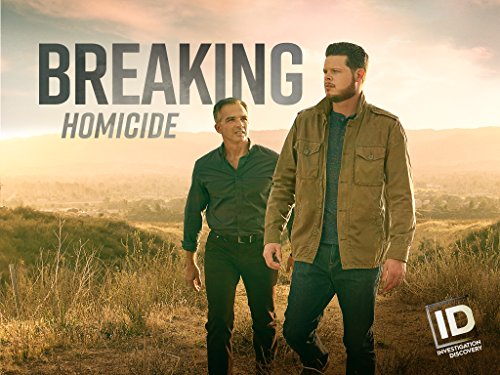 Breaking Homicide is back! Investigation Discovery just announced the TV show will return for a second season in June.

The true crime series follows veteran police sergeant Derrick Levasseur as he searches “for answers behind some of the nation’s most confounding cold cases.”

(Silver Spring, Md.) – Leading true crime network Investigation Discovery (ID) announced today the sophomore season of fan-favorite cold case series, BREAKING HOMICIDE. Featuring veteran police sergeant and P.I. Derrick Levasseur, the new season chronicles his determined quest for answers behind some of the nation’s most confounding cold cases. When all hope seems lost and every possible lead has been exhausted, Levasseur answers the pleas of desperate families asking for help by investigating the unsolved murders of their loved ones.

Chasing down new clues and reexamining old ones, Levasseur re-evaluates each case with fresh eyes and the benefit of more advanced technology, applying his unique experiences as an undercover detective to meticulously dissect each case from top to bottom. Levasseur scours the locations of each crime for new information, sitting down with the original investigators, friends and families of the victims to try to uncover new clues that could solve these cases once and for all. The eight-episode new season of BREAKING HOMICIDE premieres Monday, June 3 at 10/9c on Investigation Discovery.

In the premiere episode of BREAKING HOMICIDE, fun-loving 16-year-old Judy Rawlings of Asheboro, NC, vanished after a midnight ride with her neighbor. The community was shocked by Judy’s disappearance, banding together to search for the missing teen and answer her family’s desperate pleas. But their worst fears become reality when her body is discovered just miles from where she was last seen alive. Her death remained a mystery, as law enforcement hit dead end after dead end, leaving the case to go cold. Now, Levasseur teams up with local Asheboro law enforcement to examine the case with fresh eyes. Could someone in this small town hold the key to solving Judy’s murder? Levasseur is determined to find out.

What do you think? Have you seen Breaking Homicide? Will you watch season two?

I’ve been waiting to hear about Breaking Homicide. I don’t hear anything! This show was amazing. I think Derrick helped so many people, that you are doing a disservice for not bringing the show back!
There are many fans waiting to see this show. Please don’t disappoint us. And, please don’t disappoint the many people, who need Derrick to help solve these cases!
Thank you!

Is there going to be a third season of Breaking homicide

I loved him on Big Brother!!!

LOVE this show, don’t want the episodes to end!!!

I LUV ID! BREAKING HOMICIDE IS ONE OF IT’S BEST SHOWS. SGT. D. LEVASSEUR IS HEAVEN SENT! TO USE ALL HIS ABILITIES, TOOLS N I’M SURE SOME OF HIS OWNFINANCES TO HELP VICTIMS N FAMILIES REST MORE PEACEFULLY. N IT DON’T HURT THAT HE’S EASY ON THE EYES

I watched it last night, and I liked it. There are a lot of new series’ coming out but I think this one is the one I would like to investigate my friends’ brothers disappearance.

Please God No!! It is terrible and a waste of time!! I love ID and this show is a disgrace