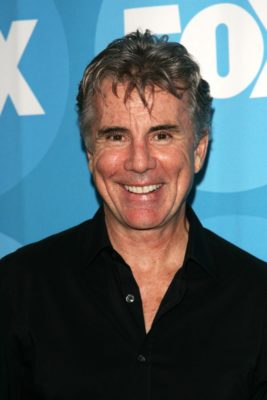 John Walsh is back on the case. Investigation Discovery just announced the premiere date for their new TV show, In Pursuit with John Walsh.

The true crime series “takes the audience on a journey through the eyes of family members, friends and authorities who are desperate for resolution, detailing two fugitives and two missing children each hour.”

In Pursuit with John Walsh debuts on Investigation Discovery on January 16th at 10 p.m. ET/PT.

Icon of justice and victims’ rights advocate John Walsh joins America’s leading true-crime network, Investigation Discovery, on their joint mission to track down fugitives on the run and find missing children with IN PURSUIT WITH JOHN WALSH. Each week, John Walsh leads viewers through unsolved violent crimes that urgently need to be closed – where time is of the essence and harnessing the power of ID’s active and engaged audience could bring these criminals to justice. Joining John in every episode is his son, Callahan Walsh, who leads the operation on the ground, working in tandem with the community and local authorities to search for persons-of-interest. In partnership with the National Center for Missing & Exploited Children (NCMEC), the series will also feature two missing children each hour, providing age-progression photos and descriptions in the hopes that viewers can provide new leads to their whereabouts. Airing for 12 consecutive weeks, IN PURSUIT WITH JOHN WALSH will make its world premiere on Wednesday, January 16 at 10/9c on Investigation Discovery.

“No one better personifies the idea that one person can make a difference in this world than John Walsh – he took unimaginable heartbreak and turned it into his life’s mission to bring criminals to justice and find missing children,” says Henry Schleiff, Group President of Investigation Discovery and Travel Channel. “This is certainly one of the most important active investigation series we’ve created on ID because just a single break in a case could help law enforcement solve these crimes once and for all and, possibly, prevent further tragedy in the lives of families, across America.”

“If at least one child comes home and one homicide is solved, we will have done our job,” says John Walsh, host and executive producer of the series. “Now, with the help the passionate fans at Investigation Discovery and my team, we have a greater chance of catching these bad guys once and for all.”

IN PURSUIT WITH JOHN WALSH takes the audience on a journey through the eyes of family members, friends and authorities who are desperate for resolution, detailing two fugitives and two missing children each hour. Every week, John and Callahan dissect each unique story from top to bottom, sharing current interviews with surviving family members and friends, chasing down new clues and reviewing the evidence in each case. The series will utilize crime scene photos, telephone calls and location-specific recreations, turning these cases into active hunts with help from the ID viewers at home.

Investigation Discovery will tap into its uniquely engaged audience to help track down these persons of interest. An active call center and dedicated online hub staffed by trained operators will accept anonymous tips and alert the proper authorities. To engage with the show, viewers are encouraged to connect using the hashtag #TeamInPursuit, join the IN PURSUIT WITH JOHN WALSH Facebook page at Facebook.com/InPursuitwithJohnWalsh, and connect on Instagram @InvestigationDiscovery or Twitter @DiscoveryID.

In the premiere episode airing on Wednesday, January 16 at 10/9c, Luis Frias from Blackwell, Okla. makes John Walsh’s personal most wanted list after allegedly stabbing Frias’s estranged wife to death in front of their children in 2013. Then, Callahan travels to Allegan, Mich. to explore the bizarre case of Harold “Butch” Knight, who leaves a trail of clues after confessing to killing his wife in 2015. He has been spotted in northern New England.

What do you think? Do you watch a lot of true crime shows? Will you tune in for In Pursuit with John Walsh?

Please be sure the murder of Derek Becker is pursued until solved. He was a 21-year-old baseball player at Keiser University in West Palm Beach who transferred from Iona and hails from Cohoes, NY.

I watch many crime shows. I also need help in investigating the murder of my niece Trish Haynes who was murdered in Grafton NH in May of 2018 and her murderers are still running free despite many witnesses coming forward and telling the investigators about the abuse and torture she suffered at the hands of someone she thought was her friend. You can Google the murder of Trish Haynes in Grafton NH and see the news broadcasts and get a little info about it. Please contact me to get the rest of the untold story about the murderers.Ashley and Douglas… Read more »

I’ll be watching for sure at least I was. You

I have been following Mr, John Walsh for many decades;his dedication is unmeasurable. I particularly enjoy watching In Pursuit for many reasons…the primary reason is the Before & After/updated photos of the individual being sought. I have a page on facebook; https://www.google.com/search?client=opera&q=Unconditional+injustice&sourceid=opera&ie=UTF-8&oe=UTF-8'Unconditional injustice’, I would like to add those pictures so they can be spread to others….one never knows!! Especially that picture of MIKE BULLINGER (killed three women and a dog;left in a shed… found 10 days later).

i would love this show but i do not have cable tv.

I’ve only watched a few episodes but one thing I noticed is that two thirds of the murders on the show are committed by Hispanics and three quarter of them are by minorities which is not represented by our population as a whole. Whites and Blacks commit about the same number and both commit twice the number of murders than Hispanics. I’m not Hispanic nor have any Hispanic friends but the show seems racist. Last episode I turned off when again it was slanted against Hispanics. With all the anger and hatred in last two years I just don’t want… Read more »

DEFINITELY! I love John Walsh and his program and was pretty upset when they took down America’s most wanted. I’ll watch it every week, just like I did AMW

I don’t enjoy it as much as Most Wanted, something is missing. John should be in pursuit of getting that show back.

My family and I have been watching John Walsh for years and look forward to watching his new show with son Callahan. His shows are always interesting, informative, and thought-provoking. After watching we are always more observant and cautious of those around us. We also love Joe Kenda and glad they are both on Wednesday night.

Yes, I am looking forward to watching John Walshs Series.
I also like the fact that you utilize and maintain loyalty to your ID actors. I dont mind seeing them on several different shows. Providing these ppl with a constant stream of work makes me like your network even better.