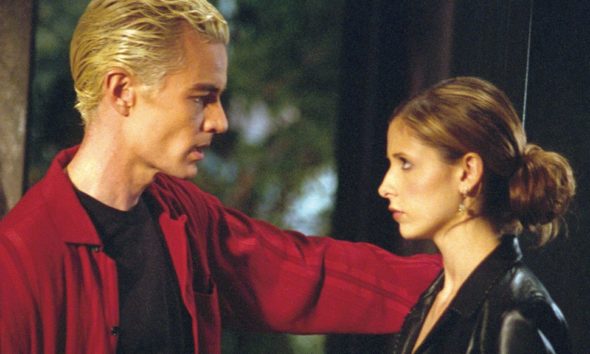 Will there be a Buffy the Vampire Slayer reboot? Deadline reports Fox 21 TV Studios is developing a new version of the Joss Whedon TV show.

From Monica Owusu-Breen and Whedon, the reboot will feature an African American lead “and like the original, some aspects of the series could be seen as metaphors for issues facing us all today.” The original series ran on The WB/UPN from 1997 to 2003. The cast included  Sarah Michelle Gellar, Nicholas Brendon, Alyson Hannigan, Anthony Head, James Marsters, Emma Caulfield, Michelle Trachtenberg, Kristine Sutherland, Charisma Carpenter, and David Boreanaz.

On Twitter, original Buffy the Vampire Slayer star James Marsters praised the idea of a reboot and Stranger Things star Shannon Purser said she wants to join the new show:

Holy crap! ‘Buffy’ is getting a reboot?!! Awesome! Black teen Buffy, cool! Joss is producing, thank god! Empowering the female youth, spectacular!!! Personally I hope that the new show retains the message of “Don’t give up, not on yourself, not on the world.” What do you think?

Reboots are a tricky business, but I would love love love to be Willow in the new Buffy.

What do you think? Are you a fan of Buffy the Vampire Slayer? Would you watch a reboot?

If it was up to me…I would have all non white actors star in original stuff to prevent the haters from coming out. We can’t even exist in the same fandom or universe without fans going crazy. We have watch stuff that starred people that didn’t look like us but we can’t be a part of those fictional worlds. People disgust me more and more each day. I’m so depressed about the people on this planet and my own problems. So to all the haters: do like I do when I get sick of watching the same typical actors on… Read more »

A lot of people on this site hate things with black leads especially female. Since I found this site I’ve seen who some favor. Less positive or hateful comments for people of color or no interest at all. There are a few who will give others a chance. This will be another slayer. There was another slayer one time on the original show so you haters look like idiots! Y’all can’t complain know since it won’t even be Buffy. See your real colors.

I loved the original. But from what I just read about the reboot, I probably won’t watch it. There’s a reason shows are so successful and stand the test of time. Don’t mess with something that works.

Ahh, but not all re-makes are from the same creators as the original, and none of them were Whedon.

Anybody that supports this I see a bunch of people give thumbs down. I give a thumbs UP because it’s an original character not a Buffy remake. So no reason for the hate for this…

I’d watch it, loved the orig. Hope they keep to the spirit.

I would so watch it. That was my favorite show and I got my daughter into it as well.