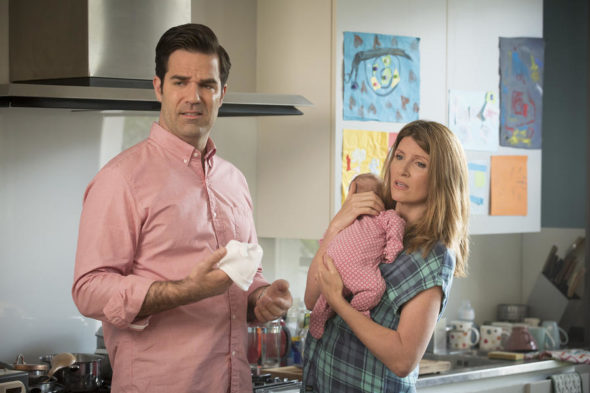 “I’m so tired I could cry.” Amazon just announced the premiere date for Catastrophe‘s fourth and final season.

The comedy series centers on Irish woman Sharon Morris (Sharon Horgan) and American man Rob Norris (Rob Delaney). After conceiving a child during what was meant to be a one-night-stand in London, the two move in together and try to form a family. The cast also includes Ashley Jensen, Mark Bonar, Daniel Lapaine, Douglas Hodge, Jonathan Forbes, Gary Lilburn, Tobias Menzies, and Frances Tomelty.

The fourth and final season of Catastrophe debuts on Prime Video on March 15th.

They need each other to stay afloat. Rob Delaney and Sharon Horgan return for the final season of Catastrophe March 15th only on Amazon Prime Video.

In the fourth season of the Emmy-nominated comedy, Rob and Sharon’s relationship is pushed to the limit. Rob is sentenced to community service after his drunk driving accident while Sharon learns how to trust him again. This leads to exploring new life changes including career, religion, and health. Their love and humor have survived the ups and downs, but will it be enough to keep them afloat.”

What do you think? Are you a fan of Catastrophe? How do you want the series to end?

I think it should have a season 6. It is a funny and unique show.