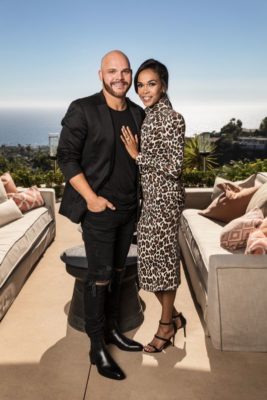 OWN has a new slate of series in store. This week, the network announced the premiere dates for their new TV shows: Chad Loves Michelle, Family or Fiancé, Rocket City Revival, and Ready to Love.

See more information from OWN below:

“OWN viewers are looking for real and honest stories that are relatable to their own lives,” said Erik Logan, president of OWN. “These new shows all feature passionate relationships and the desire to keep love alive and will captivate viewers from the very beginning. I’m excited about our growing roster of unscripted programs joining our Saturday night lineup.”

About the new series:

“Chad Loves Michelle,” from Relevé Entertainment and InventTV, will feature an honest inside look at the path to marriage between Grammy award-winning singer Michelle Williams, one-third of chart-topping Destiny’s Child, and Chad Johnson, sports chaplain to professional sports organizations. Having been together for a year and never in the same city for more than seven days, the newly engaged couple is turning to intensive pre-marital counseling to help prepare them for life together as husband and wife. Both are relocating to Los Angeles from different cities in the months leading up to their wedding, but not to the same bedroom. Guided by their faith and unwavering values, the couple has vowed to consummate the relationship only after they are wed. Each episode will feature real issues the couple is tackling in their everyday lives, including Michelle’s high-profile battle with mental health issues, and the lessons they learn from the pre-marital counseling sessions that bond them stronger together. Sergio Alfaro, Michaline Babich, Holly Carter, Michelle Williams and Chad Johnson are executive producers.

“Ready to Love,” a dating series from Will Packer Media and Lighthearted Entertainment, explores the real-life dating interactions of sexy, successful and grown Black men and women in their 30s and 40s who are each looking for lasting love and an authentic relationship. A unique twist on a typical dating show, “Ready to Love,” highlights the men’s observations and experiences in the search for true love in Atlanta. The series is hosted by Thomas “Nephew Tommy” Miles of “The Steve Harvey Morning Show” and joins OWN’s popular Saturday night unscripted programming lineup. “Ready to Love” is produced by Will Packer Media and Lighthearted Entertainment. Will Packer is executive producer. Will Packer Media’s Kelly Smith, Lighthearted’s Rob LaPlante and Jeff Spangler also executive produce along with Anthony Sylvester.

In “Family or Fiancé,” from Bunim/Murray Productions, newly engaged couples whose families have voiced paralyzing concerns (both real and imagined) over their proposed marriage, will bring their families to live together under the same roof. The stakes have never been higher as they take on activities designed to strengthen their bond, unpack their differences, and show the betrothed couple in a whole new light. Will the week of experimental “family time” confirm their families’ concerns and lead to a breakup? Will the families discover enough common ground to give their blessings? If all else fails, how will the couple face the future knowing that their families may never accept their partner? Executive producers are Gil Goldschein, Julie Pizzi, Jonathan Murray, Jonathan Singer and co-executive producer Erica Ross.

“Rocket City Revival,” from Kingdom Reign Entertainment, brings together three high-powered African-American couples who have returned to Huntsville, Alabama (nicknamed “The Rocket City” for its close association with NASA and U.S. space missions) to help revitalize the region through their joint real estate venture. The couples are long-time friends and avid socialites who all have their own personalities, strong points of view, and individual strategies for wanting to make this huge undertaking a success. We’ll see if they can succeed at mixing business with pleasure for all the right reasons, or if the cutthroat industry makes foes of the longtime friends. Rocket City Revival is produced by Kingdom Reign Entertainment for ITV America. Carlos King, Gil Lopez and Andrew Hoagland are executive producers.

What do you think? Do you watch OWN? Which new series will you check out?

I absolutely love David Makes Man! I hope it has a large audience so we can have a Season 2!