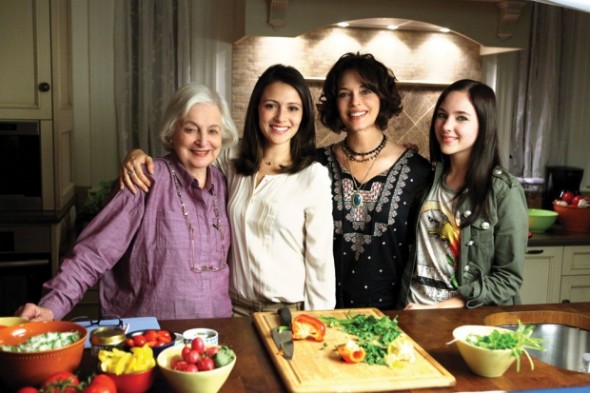 TV show description:
This dramatic series follows a twenty-something aspiring journalist whose world is turned upside down when she learns that she has cancer.

Smart, charismatic and quick-witted, April Carver (Italia Ricci) seems poised to have it all. She’s landed a job at a major Boston newspaper and a date with her super-sexy co-worker — all while managing to be a supportive daughter, grand-daughter and sister to her family (who lost their patriarch to a tragic accident two years earlier).

In an unexpected twist of fate, April lands in the hospital where her estranged uncle, George, works as an oncologist. While there, she learns the devastating news that she has cancer. However, April refuses to give up her dreams and goals and fights to keep her life from unraveling.

April’s mother is Sara Carver (Mary Page Keller), a professional therapist who’s beautiful, smart, good-hearted and fiercely protective of her family. Following the sudden death of her husband, Sara is nervous but finally ready to return to the dating scene.

Sara’s other daughter is Brenna (Haley Ramm). She’s a rebellious teen who will always choose a party over homework — a habit that’s gotten her into serious trouble in the past. She continues to test her mother’s patience and envies the perfect image her sister April seems to effortlessly uphold.

April’s fun-loving but level-headed best friend and loyal confidant is Beth Kingston (Aisha Dee); a vibrant, young Australian-born girl in her twenties with a keen eye for fashion. Beth still works as a barista at the same coffee shop April left months ago to pursue her dreams. She optimistically believes that the best is yet to come and is determined to enjoy all that a carefree life has to offer in the meantime.

Cultured and attractive, Dominic Russo (Richard Brancatisano) is the Arts and Entertainment reporter at April’s Boston newspaper. Dominic’s job gets him into all the coolest gigs in the city and his irresistible charm could get him any girl he wants, but he has his eye on April from the moment she sets foot in the office. Their flirtatious banter finally leads to what seems like the perfect date, but her illness threatens the possibility of a real relationship without Dominic even knowing why.

The son of a wealthy gubernatorial candidate, Leo Hendrie (Scott Michael Foster) struggles with bitterness at living in his father’s shadow and being tethered to his family’s money. He has more in common with April than she might expect from their initial, rather unpleasant encounter.

George Carver (Steven Weber) is a pediatric oncologist whose connection to his brother Thomas’ tragic death two years ago has isolated him from the Carver women. In a twist of fate, he discovers April is sick so he must confront his past demons.

Series Finale:
Episode #34 — La Dolce Vita
Whether it’s the Italian honeymoon that never happened, the unchecked item on her bucket list, or her lack of inspiration, all signs point April to Rome. Caught up in the midst of family drama, April faces too many distractions that keep her from making progress on her book. But will April find the inspiration she seeks in Rome, or will this trip lead her down another path?
First aired: September 28, 2015.

What do you think? Do you like the Chasing Life TV series? Do you think it should have been cancelled or renewed for a third season?

This show had great story lines and depth. Truly dispappointed is has been cancelled. Please consider brining it back on the air! We need more shows like this with substance.

This show was a great show and disappointed to hear it has been cancelled. The story lines of this show were great with meaning/depth. Please reconsider bringing this show back on the air!!!

This had depth of character and I enjoyed watching with my family. I am completely baffled why we can’t have more 12 week series with beginning and endings. Why quit in the middle?

I really liked this show..so hard to find good shows , I guess now it just got harder…I hope they really rethink any chance of it coming back…fingers crossed…

I loved the show so disapointed we don’t have an ending.

What happened? Is Chasing Life Not Renewed? Please don’t cancel the show!
I love this show! I hope there is still a chance for Chasing life

I loved the show and upset it didn’t get renewed. Really, really enjoyed the show.

I loved the show, characters and the story line. I was disappointed that it has been cancelled.

I thought the characters were very unique and I enjoyed the plot. Too bad different sometimes isn’t very poplar.

I cannot believe they cancelled the show. This is very disappointing every time I like a show from this network they cancel it just like the lying Game I love that show. I’m going to stop watching Freeform if this keeps continues.

I cannot believe or understand why this series was cancelled. I cannot believe they would leave their viewers hanging. The sensible thing to do is to continue the story and give it an ending, not leave it unfinished, this is wrong. This was a very real show and from what I see a lot of people are disappointed by the decision. I will not invest anymore time on Freeform tv shows if this continues.

Liked the show very much. Cast was great. Was expecting a third season and would still like to see it happen.

I loved this show and I am really sad that ABC Family Cancelled the series I wish they would bring it back!!

I also liked this show when I really get into shows they always cancel them! I would like to see them bring this how back!

I have been waiting for its return. I am sadden to learn it has been cancelled.