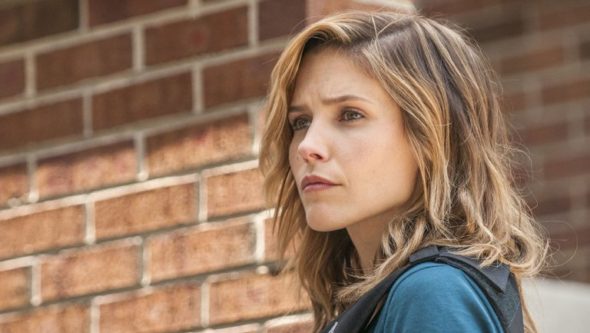 The next season of Chicago PD will be missing a familiar face. Variety reports Sophia Bush will not return for season five of the NBC TV series.

Bush has been with Chicago PD since season one. It’s unclear why she is leaving the NBC series. The show has been a solid ratings performer for the Peacock Network, with season four averaging a 1.37 rating in the 18-49 demo and 6.536 million viewers.

What do you think? Are you a fan of Chicago PD? Are you sad Sophia Bush is leaving? Will you still watch?

Now that Sophia Bush is gone we will be able to see the other characters grow. It was becoming too much of a soap opera. Here’s hoping for more crime drama!

I do think she plays a key role in the show but if they find someone who can step up to the plate, which they must have plenty of good looking women that can play the part..The show rocks, it will take more than Sophia for the show to go down.

I’m so sad… there was still so much to explore on the character… it definitely feels like unfinished business… i will try to keep watching but I think that something will be missing and that I won’t like it..

so much sad, I really love her acting and she was one of the reasons I start watching this show! why she leave?

I’m sad to see her leave, but I would keep watching the show since
there are so many interesting parts on the show.

thats me done she was the only reason i started watching the show now i dont c the pull to watch it , does explain why she has had bearly any storylins unlike previous seasons

Yes, I like her and I’m sorry to see her go. I will still watch it. I like Marina better, so I’m glad she’s coming back.

PD and Med are my favourites on tv. Sophia was my very favourite in PD. very disappointed to see her leave. Would like to see Jon return. Also sad to see Justice cancelled. Of course I will continue watching PD but it won’t be quite the same!

Will miss her character but hope to see ‘Marina back and Jon since Justice cancelled. Marina was my favorite

I am really sad that Sophia Bush is leaving Chicago PD because there is still a lot up in the air between her, Bunny and Voight. NBC has stupidly cancelled Chicago Justice and left Antonio Dawson without a home (hopefully will come back to PD) and now she is leaving PD. Whatever NBC needs to do to make this right, they need to do it. It will not feel right without Erin behind the desk. Stop wasting my time on a dumb dance show I’ll never watch and those stupid reality and lousy sitcoms that stink and invest in this… Read more »

So I am guessing this is why they brought in Tracy Spiridakos in the last few episodes. At first I thought it was temporary to replace Marina Squerciati while she was on maternity leave. Now I am not so sure. Tracy’s character may become permanent, which is okay by me, as I have liked her since Revolution. I do hope that Antonio Dawson (Jon Seda) returns since Justice was cancelled.

Tracy was brought on as a temporary replacement while Marina was on maternity leave. Once the show knew Sophia was leaving though, I think they may have started writing to that a little bit. Because, Tracy was eventually promoted to series regular. Personally, I think Hailey is a better character already. Erin’s misery and her constant Bunny problems got real old real fast. The show will be fine, since this is an ensemble case. The whole cast is strong, always has been. It’s excellent from top to bottom. At least, the other characters will finally get storylines. I was getting… Read more »

What are they thinking letting her go I predict the show will not be the same if it is money give her what she wants she is worth it .

Thought the writers did a nice job throughout first 4 years tying in how Lindsay became a police officer with Hank’s guidance, and she played the character well. However I wouldn’t say she was a critical loss, and leaving seemed destined after watching ending of this season. John Seda left at end of last season for Chicago Justice, which NBC unfortunately just cancelled. So would love to see him return to PD as he was a strong character and would be great fill in for Lindsay (Sophia Bush) departure. No matter the producers decide to do, one thing for sure… Read more »

Even if John Seda returns it won’t be the same without Sophia Bush. ; (

You’re right. It’ll be better, now that everything doesn’t revolve around Erin. Antonio and the other characters will finally start getting their own storylines.

I kind of figured she’d leave when she took the job in New York to work with the FBI. Whether she is on the show or not makes no difference to me. Hopefully this means Jon Seda will go back to PD