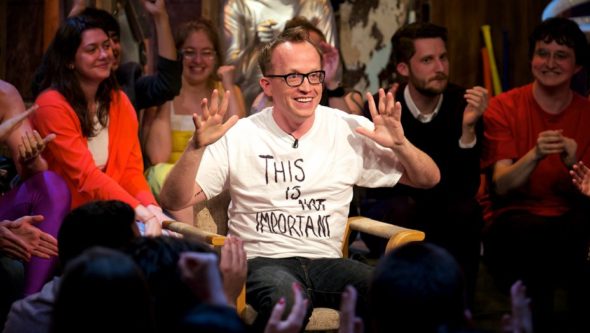 The late-night chat show features comedian Chris Gethard “as he attempts to ring-lead a panel of comedian friends and special guests, along with a live studio audience, who participate in games, tackle bizarre stunts and react to the controlled chaos around them.” Previous guests have included Method Man, John Oliver, Wanda Sykes, Jon Hamm, and Patton Oswalt.

truTV has ordered 10 additional episodes for season three of The Chris Gethard Show, bringing the season total to 26 episodes. The new episodes are slated to debut this spring.

The #ChrisGethardShow 's inaugural season on @truTV has been extended by ten more episodes. Thanks to everyone who supports this show and refuses to let this ramshackle dream die.

Here’s what you need to know:

· truTV has ordered an additional 10 episodes of its live late-night series The Chris Gethard Show, which will premiere in spring 2018;

· Chris Gethard announced the news live on air during last night’s episode, but before the show, he shared the news by calling one lucky fan;

· The series, which is produced by Funny Or Die, brings a dose of humor and heart to the late night space, with a high-profile roster of guest stars including Method Man, John Oliver, Wanda Sykes, John Mulaney, Gillian Jacobs, and Adam Palley among others;

· These 10 hour-long episodes are part of the series’ third season (its first on truTV), which debuted in August, and brings the full season episode order to 26.

In last night’s live episode of The Chris Gethard Show, Chris Gethard announced to fans the news they’ve been waiting for: truTV has picked up the late-night talk show for an additional 10 hour-long episodes, which will premiere in spring 2018. The series debuted on truTV in August and stars Gethard as he attempts to ring-lead a panel of comedian friends and special guests, along with a live studio audience, who participate in games, tackle bizarre stunts and react to the controlled chaos around them.

Before making the announcement on live television, in a gesture that signaled the continued importance of and his commitment to the show’s fanbase, Chris called one random fan to share the news and let her be the first to know. Check out a video of that exchange here: https://youtu.be/KXub4EvYYKU

What do you think? Do you watch The Chris Gethard Show? Are you glad there’ll be more episodes?

I look Forward to this show every week! He’s One of us and gets it….. enough with the short renewals. Just commit tru TV!