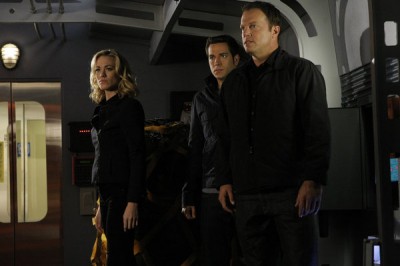 we needed the Flash at the ending,

I loved this show when I could watch it, but often found myself missing episodes due to time conflicts. The network never did give this show a decent time slot. So, just watched it with my teenage daughter on Netflix and was stunned by the ending. My daughter cried for hours and I felt like my heart was going to break. The writers really gave you something to think about with that ending. The sad thing was this show seemed to always be about Chuck vs The Happy Ending, and I don’t think any of us really know if that… Read more »

The alternate ending found on YouTube is helpful as it stays true to the theme of “flashing” and having suppressed memories come to the surface when triggered by something connected. When you look at these two characters, it’s interesting that they were almost always battling each other in a test of wills, and yet in the one instance that Sarah gets on Chuck’s bad side the episode is labeled a fight. It was time to end the show…a lot of sparks and fresh ideas seemed to have eroded away. Even the bad guys weren’t original and the supporting cast seemed… Read more »

That was a HORRIBLE ENDING!!! I am so upset that I cant even speak. Horrible!!!!!

I Started this program with my fiancé at the time this show came out in 2007- we would watch it together every week…but didn’t get to finish this series until today-years later-thank goodness for netflix….this show ment a lot to me with memories of my own….adapting to the characters and the taste of music behind the series was incredible ….so when I finished the last episode today….I cried for all the wonderful memories this show brought…. I was a little broken hearted the way they decided to end it…..I guess mad that all those years chuck didn’t get Sara’s unconditional… Read more »

Reader
Just do one more season

That was a sad end and chuck is a part of my heart, do ons more season

How can they put this ending never been this mad and confused in my entire life…..

I was certainly not satisfied, however, hopeful that Sarah WILL remember “Her Chuck”. Because he never ever gives up on her. It is tough for a man to give all emotions but Chuck has been crazy about her from the very beginning. They actually should be considering a mini-series format to complete the series. I have already written storylines starting from the kiss if only I get in tough with the executive producers & creators to finish this love story, that is not only heartwarming but believeable. If anyone can help me get it to the powers that be please… Read more »

This is not a good way to end it all. Needed more of a happy ending

i think they should air chuck again please this makes me sad i wanna find out what happends does chuck and sarah have kids get the house what happends to jeffster the buy more,morgan and alex casey please make anouther come back episode im sure it would make the fans of this show really happy

I discovered Chuck on Netflix and I simply just love this TV series. Why did it have to get only 5 years and why did NBC not promote this show more then they did, it is simply ‘awesome’, :(,

not a good way to end it all. needed more of a happy ending.

Just finished watching season 5, the series finale (yes, I’m a bit behind). The ending was a bit sad indeed, but I don’t think it was as disappointing as some of the other commentators here are making it out to be. True, Sarah does not have all of her memories back; but there were already hints that some of her memories were coming back. Also, her willingness to ask Chuck to kiss her in the final scene– and more importantly, for her to continue locking lips with him long after the first kiss had been completed — shows that (1)… Read more »