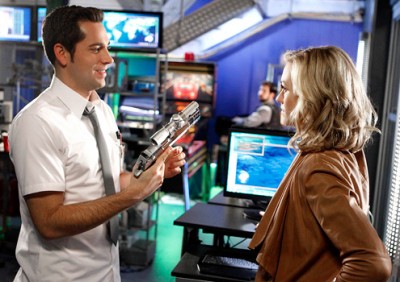 If you’re a fan of Chuck, you know all too well that tonight marks the end of the NBC series. Chuck escaped being cancelled many times during its run due to low ratings and now, it’s time to say goodbye.

There’s been no shortage of coverage of the series finale and the final days of shooting. If you just can’t get enough of the backstage stuff, here’s a round up of the best of what the net has to offer:

BuddyTV: A brief history of the Intersect

TV Guide: Part two – Sarah vs. the Faulty Intersect and the repercussions

TV Guide: Part three – The cast share their favorite moments and what it was like to film the finale.

TV Guide: Part four – The role of the fans and the show’s important “nerd appeal.”

TV Guide: Part five – What’s next for the cast.

TV Line: Hints about how the finale will include homages to the show’s beginning, a lot of action, and a lot of tears.

TV Tango: Scott Krinsky, who plays Jeff Barnes, answers 17 questions and talks about the last day on the Chuck set, about his character’s past, present and future, and jokes about the possibility of his competing on The Amazing Race in character.

Zap2It: Vik Sahay and Scott Krinsky discuss the final Jeffster! performance and their thoughts on leaving Buy More for good.

Zap2It: Yvonne Strahovski and Adam Baldwin on crying (and not crying) on camera and during the final days of shooting.

Zap2It: Joshua Gomez discusses his getting some closure on Morgan Grimes and the series.

Zap2It: Chris Fedak talks about how crafting this finale was different from all the rest and why he believes fans will be satisfied.

What do you think? Are you pleased with the way that the series is wrapping up? What will you miss most about Chuck?

UPDATE: What did you think of the series finale?

I was so sad to see it go. It was funny and interesting and different…
I think Chuck’s dad still lives though and I hope there is a movie.

“Chuck” was an awesome show. I wish that it would last for years to come.

Our family looked forward to watching Chuck no matter what night it was on. Will miss the series.

Jake 2.0 was better, but as a fellow geek, I’m glad fans of Chuck had their day.

About time. It’s ending three years later than it should have.