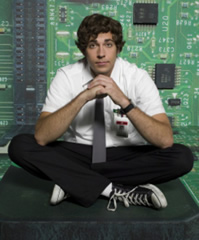 This show is awesome! I don’t know why more people don’t love it!

Steve, The numbers were correct at the time this post was written but were apparently updated. I’m revising the post. Thanks.

Jason, sorry to piss you off but when facts are wrong, I just pointed them out and everything I said is true you can check them if like. If they were correct about there numbers I would not have said anything so I dont call that being arrogant I call that correcting a mistake. Plus if the show was doing as bad as you say in the ratings I would just chalk it up to another show I like that does not have a chance to return and not say anything but that also this not true it least for… Read more »

It’s comments by people like “Steve” that almost make me want to see Chuck get canceled. They think their show is th only one worrth saving and everybody is against it because its such quality. How arrogant. Dancing skews older so with the programming on the other channels Chuck had a great chance to show what it could do and it didn’t. Given the choice, even many of Chuck’s fans will watch something else. The little increases aren’t impressive because the show’s overall ratings suck. Toughest night on TV? How about going up against young-skewing American Idol or CSI? Weeknights… Read more »

example Bone is avg? it pull in close to 10 million and 3.0 average I don

This is my favorite show on TV and if it was taken off, I would be crushed. I find myself watching it over and over again. I can’t wait until Monday night to see what happens. I have never felt that way about any other show because it keeps me wondering what is going to happen next. Also, it has a great cast to make it even better. I would be truly discontent to see Chuck go.

The poor ratings I think have more to do with a large portion of the public upset with nbc, msnbc, etc being in bed with the Obama administration. Chuck is one of the few shows worth watching on NBC. If it wasn’t for Chuck, Biggest Loser and Big Bang there will be no reason to watch NBC and I too will boycot NBC due to the fact they are in bed with OBAMA

Of course this just goes to show today’s youth mindset of dumbed down entertainment. Instead of getting great shows like Chuck and Eli Stone we will get to see more trashy stupid reality shows of people degrading themselves. I am tired of these executives to not have any foresight in television. A lot of time shows that become iconic, start slow and gently build into big number powerhouses. If executives are going to make these decisions they should at least give writers 1/2 season 13eps to cleverly tie up storylines and give the true fans the closure that they deserve.

The digital landscape is already littered with the corpses or terrific TV shows that were either too smart or too clever for their own good. The masses seem to want the lowest common denominator – a sad state of affairs for our nation. Chuck, like already dead Pushing Daisies and Eli Stone began during the fateful strike year, and THAT more than anything is most responsible for their deaths. If only the unions had known the true damage their strike would cause over the long haul to everyone in the creative professions (but esp actors and writers). Nothing against Heroes…for… Read more »

How about moving Chuck (and Life, for that matter) to USA network? Chuck/Burn Notice and Life/In Plain Sight blocks would be awesome!

PLEEASSE DO NOT CANCEL CHUCK!
THE STORY LINE IS GETTING BETTER AND BETTER EVERY EPISODE!.
The writing is spectacular and keeps me thinking and excited

@Torrentfan: The ratings are created to give advertisers an idea of how many people will see their commercials if they’re run during a particular show. The commercials pay for the production of the show. Torrents don’t have ads and therefore have no value for advertisers or the network.

Online streaming (Hulu, NBC.com) is taken into consideration but in reality equates to a very small percentage of a network show’s audience.

How can ratings be an issue when a high number of viewers in the 18-49 demographic torrent their shows? I attend a very very very large college, and I would venture a safe estimate that 60-75% of those in attendance at the school TORRENT their shows. The other 20% or so watch their shows through streaming video options like NBC.com (which I am sure they count in the tally) and Hulu. When are the TV stations, the MPAA and the RIAA going to learn that their business model and concept of what is popular is usually extremely far from reality.

This amazes me. This is really one of the more entertaining shows on television. I enjoy it as much (and sometimes more) than Heroes. But, if Heroes is struggling too, then I guess my tastes are in a different category.