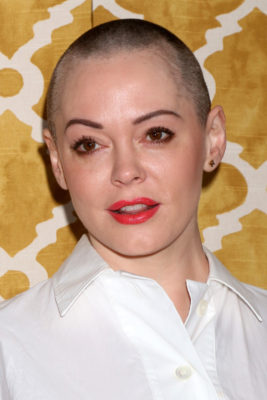 Citizen Rose has arrived. This week, E! announced their new Rose McGowan TV show will premiere in May.

The docuseries offers “unfiltered access as Rose laughs, cries, and fights to survive in a world where she finds it hard to know who she can trust.”

Los Angeles, CA –April 23, 2018 – Artist/activist Rose McGowan has gone from a world where she was maligned, discounted and disbelieved into one where women are using their voices to call out abuses of power. E!’s limited series “CITIZEN ROSE” returns for a three-part special beginning Thursday, May 17 at 10pm ET/PT and picks up where the two-hour documentary left off, with McGowan set to launch her now New York Times bestselling think piece BRAVE into a world in which she is at the center of a massive social and cultural change.

Viewers get unfiltered access as Rose laughs, cries, and fights to survive in a world where she finds it hard to know who she can trust. Rose learns how to be an activist whose activism is based on trauma as she navigates an extraordinarily unusual life path. We see, in almost-real time, as she deals with the emotional toll of having to constantly revisit her painful past, all the while launching a book that is one of her proudest achievements. Rose takes her social movement, #rosearmy, global to Berlin, Paris and Rome with friends like fellow survivor, Asia Argento. With the pressure on her at an all-time high, and a confrontation during a book signing, Rose reaches her breaking point and comes face-to-face with a lifetime’s worth of trauma that she’s never dealt with. With Hollywood behind her, Rose journeys to the beautiful place where she grew up as part of the Children of God cult and must find the courage to face the darkness of her past in order to smile brightly at her future.

What do you think? Are you a fan of Rose McGowan? Will you watch Citizen Rose?