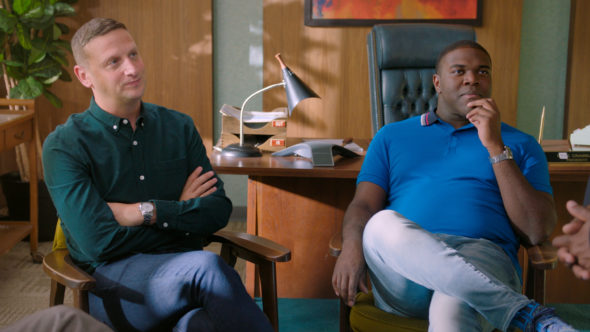 Are Sam and Tim getting the job done during the second season of the Detroiters TV show on Comedy Central? As we all know, the Nielsen ratings typically play a big role in determining whether a TV show like Detroiters is cancelled or renewed for season three. Unfortunately, most of us do not live in Nielsen households. Because many viewers feel frustration when their viewing habits and opinions aren’t considered, we’d like to offer you the chance to rate all of the Detroiters season two episodes here.

What do you think? Which season two episodes of the Detroiters TV series do you rate as wonderful, terrible, or somewhere between? Should Comedy Central cancel or renew Detroiters for a third season? Don’t forget to vote, and share your thoughts, below.

I love the Detroiters!! It is fresh, funny and fabulous!
Please let there be a Season 3, we are just getting to know Sam and Tim, we need more time to get acquainted. Sometimes it takes a few seasons for word of mouth to bring in viewers. Please give this show a chance!

As a native Detroiters, I enjoy seeing Detroit neighborhoods not simply depicted as bombed out war zones. It would be good to shoot scenes from festivals in Hart Plaza, some of the 200 venues used during the month long ARISE DETROIT celebrations that take place in August every year. Certainly there are negative experiences that occasionally occur. What about the various parks, farmers markets, Detroit Repertory Theater, the Charles H Wright African American Museum.These should be reflected in a show about Detroit. Detroiters should be about the many southern states enclaves African Americans created after both world wars as they… Read more »