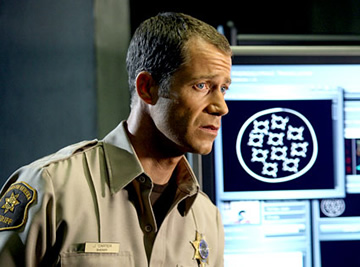 I love this show, they best not ever cancell it!!!

I really like Eureka. This is easily one of the best serial programs in my lifetime. WEll done, good acting, good story line, etc. It has all of the elements needed for success: A little comedy, a little romance, some great special effects, some ‘science’ thrown-in for good measure, a few continuing story lines to maintain continuity of the characters. It is just hard to find a better show. I am a PE with degrees in physics and engineering, and have always had an eye for the ‘fringe’ stuff. Eureka keeps me interested. The science isn’t always right, but it’s… Read more »

Eureka is one of the best shows I have EVER seen. I fell in love with it from the first episode, and have followed it faithfully since, have all the dvds, and had to replace the first season finally. It’s one of the only truly original shows around (Warehouse 13 too) and the cast and characters are wonderful. I’d love to see the Artifact again, it was a crazy, weird “character” and had so many possibilities! Also, Matt Frewer, Ed Quinn, and Tamlyn Tomita, complex people with believably strange agendas, (ok, Tomita’s agenda wasn’t strange, but she’s one of my… Read more »

Great show wish there were more epsodes per season ,like 26 instead of 13 . Then repeats until the next season airs .

love the return of Eureka harries law and wearhouse 13,. All are class act showes that the network should be estatic to be envolved in. kootos

Hulu.com is a great site to watch favorite shows. I actually started watching this with netflix then got season 4 from Hulu.

Yes, I am very glad it is coming back. why can we not get return dates on Eureka, Warehouse 13, Haven, and Harry’s Law.

Finally. The only really intelligent Sfi program (maybe Warehouse 13 too) left is coming back. I HOPE. But I agee: SFI channel has reached below bottom with their movies. I rate it F for failure. They could run Eureka, Star Trek, Lost in Space (funny/silly/ok) and others and leave the junk for someone else.

I love this show-it’s a sweet blend of comedy, romance and sci-fi, and to my profound amazement, never gets boring. The character development is great, as too, the relationships between them. Have watched this from the beginning and it’s one of the few shows I enjoy and look forward to. DO NOT CANCEL THIS SHOW!!!

Like some i get frustrated with these shows that only have 5-6 episodes then disappear for another 6 months before picking back up where they left off. BUT…on-the-other-hand..I won’t miss Eureka for any reason.

love Eureka hate that I have to wait. Was hoping Syfy would bring back Kyle XY and add some new ones. I hate the stupid movies that Syfy plays on saturday night. I wish there was a channel that would play 24/7 back to back episodes of these series/

Love Eureka….but why do we have to wait until July for new “season” to start??? SyFy’s “original” movies are terrible…my husband and I call them the “Saturday nite Dgrade movies

i lov e this show.I have watched it from the beginning,glad to hear i will see more in the summer of 2011

I always assume this show has been cancelled. Why should I wait from Dec. to July for new eps, when there’s so much other content available? I really wish there was another sci-fi oriented channel that aired programs like Eureka and Warehouse 13 without all the stupid reality crap, and D grade movies.