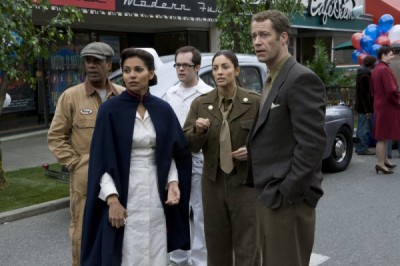 It was reported by Deadline that Eureka was being cancelled after being renewed for an abbreviated sixth season. While Syfy typically orders at least a dozen episodes each season, this renewal was for just six installments.

Syfy is currently airing the second half of season four and the cast and crew are filming the 13 installments of season five. Word is that production will finish at the end of August and then cast and crew will return in October to film the final six episodes — or maybe they won’t be the last ones.

After the news of the cancellation broke, Syfy programming head Mark Stern issued the following statement: “Bruce Miller and Jaime Paglia have brought a creative vitality to Eureka that has kept it fresh and inventive. Although we do not have a commitment beyond six episodes for the sixth season, we are hopeful that this will not be the end of the franchise.”

The ratings for Eureka have remained fairly consistent and it remains one of the cable channel’s top shows. The first part of season four averaged a 0.8 rating in the 18-49 demographic and 2.38 million viewers. The four episodes of the second half of the season have averaged a 0.7 in the demo and 2.02 million. As we all know, TV shows typically get more expensive as time goes on and that may be a deciding factor in this case.

While Syfy says that they haven’t made a final decision about the future of Eureka, it certainly sounds like this is the end. If Syfy follows their usual schedule, the six episodes of season six won’t air until Summer 2013. That’s an awful long time away. If they wait to see how those episodes perform, they’d probably have a hard time reassembling everyone to make more.

That being said, Stern’s statement does speak of Eureka as a “franchise.” A franchise is usually more than just one TV series. This could be an indication that the cable channel is considering keeping the show going in some new and cheaper way — perhaps a spin-off or an original movie. If the ratings hold up, it seems likely that Syfy won’t want to let the town of Eureka fade away completely.

What do you think? Is it time for Eureka to end? Would you like to see season seven or would you prefer a spin-off or a movie?

[…] night, Syfy aired the series finale of Eureka. Last summer, the cable channel renewed the TV show for a limited sixth season but then ended up cancelling Eureka instead. In order to give the cast and crew a chance to end the […]

Please don’t take Eureka off. The show is great, I feel like I know the cast personally. I can watch Eureka and escape reality for 42 minutes.

Eureka was a show that the whole family could watch, my 7 yr old daughter, who is scared easily will sit and watch Eureka, and if a part gets a little scary to her she will sit there and pull the blanket over her head and say “tell me when this part is over”, instead of running out of the room. Eureka is a corny, goofy, show, but it also is inspiring, the talk of space travel, and use of scientific terms is wonderful as it broadens her scope of the english language. There is no cussing, blood, or gore,… Read more »

Please don’t cancel this show. This is one of the very few shows that the whole family is eager every week to watch. It is an absolute travesty to allow such a good show to go away.

This show made me happy for 43 minutes of tv time weekly. Why take away a girls happy SYFy?

I think Eureka was the best show on public television and they are crazy if they cancel and let it go. It was refreshing, entertaining and invited a true relationship with each of the 6 characters!

With so many low-to-no quality shows on television these days, SyFy should put MORE support behind a show like “Eureka”, not less. While I applaud SyFy’s effort to fill a B-Movie niche with it’s original movies, don’t neglect the shows that allow you to call those shots in the first place,eh? Just sayin’…………

Don’t you dare. Eureka is a quality show with a good blend of humor and drama. Why cancel a success.

Blame Comcast for this travesty. A great show gone the way of” Fox’s Follies” yhe cancellation of Star Trek, Firefly. ” Smart, smart stupid” as my Mom so often quipped. Another original, creative, imaginative, sexy and funny show flushed for the sake of short term finances. Where would Warehouse 13 be if Eureka viewers hadn’t been spoon fed and now the weaker Alphas? A strong show like Eureka was the perfect babysitter while younger shows, with perhaps some developing to do and kinks to work out, gain a foothold audience. Poor decision. Syfy has lost me for the present. I’m… Read more »

It is a great t.v. show. Why kick off the show. It has little to no
violence. It makes people laugh, and forget the day they just
got thur.

It’s a brilliant comedy and one of the shows that I look forward to every week. I hope they don’t cancel it, but if it is indeed it’s time to go, I hope they treat the show and it’s viewers with respect and actually write a decent series finale.

There is a pattern here, the shows that are thought provoking (SMART) which requires some good writers are being canceled and replaced with mindless reality and (as of late on this channel) Wrestling.
I do not know what others think but this is a disservice to the “Silent Majority” of viewers who have been tuning out and finding other sources of intriguing media.

They always cancel the shows I like. I think this is a really good series & it should stay. Why don’t they cancel some of these crappy “reality” shows.

Goes to show that SCYFI is appleaing to the lower end of the gene pool.
As usual.

I have cease watching The channel and boycotting advertisers.
I suggest you all do the sam

They are making the same mistake they did with StarTrek the original series. Some of us prefer a show that stimulates ones mind instead of dulling it with mindless reality shows or predictable ‘who dunnit’ series.

I totally agree! We finally get a program about science and technology which is interesting and also make us laugh. I wonder how many students have watched this show and made the decision to have a career in this field instead of becoming an NBA, NFL or rapper star. Our school systems are in the toilet, no one wants to learn. The show is a glimmer of hope for the next generation. Shame on you SyFy and Comcast. I guess you just want to add one more wrestling match or reality show so you can make the preverbial dollar.

Dont cancel Eureka. I love this show and my whole family sits together to watch it. My 11yr old niece watches it the next day! Please keep Eureka.