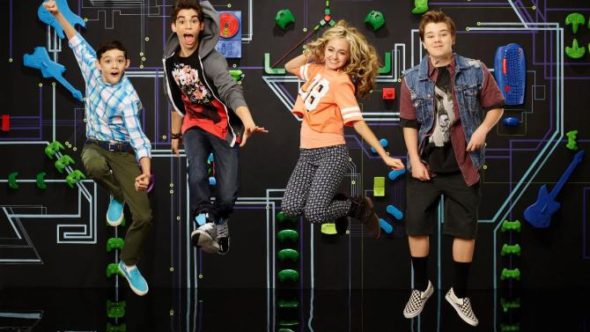 The game has ended for Gamer’s Guide to Pretty Much Everything. Series creator Devin Bunje recently announced Disney XD has cancelled the TV show after two seasons.

On Twitter, Bunje revealed the series won’t be returning to Disney XD for a third season, saying the decision was business related and not creative:

We're all very proud of the show, and we sincerely thank all of our fans who watched and reached out to Disney asking for more…

Unfortunately, this was a business decision, not a creative one. So we must leave you with 2 seasons we hope you all enjoy for a long time.

What do you think? Did you watch Gamer’s Guide to Pretty Much Everything? Are you sad the show has been cancelled?

Im so sad for one that Cameron has sadly passed and the tv show has gone off but I love all the people that are going the Cameron Boyce Foundation, but the cliff hanger on Ashley living the the team oh come on

Sooo…. Gamers guide has ended? Why do u have to end it, it is our favorite tv show can you just continue making season 3?

Also, what do you mean by it was a business decision, not a creative one? The best thing would be to make a 3RD SEASON so more people would WATCH!! Not just end the show on a poor note. :/ You cannot do that to us.. WHY?! I know that Cameron Boyce was preparing for his role in Descendants 2 , but really, you can’t make anything more for Gamer’s guide? Just going to leave fans in DESPAIR? Just make a movie, or a 3rd season.. plz.

They couldn’t just leave it on such a huge cliff hanger! Also that was such a bad ending, with Wendell and his uncle (idk) screaming because the lady popped the pig. AT LEAST make a movie or something, so you can end it with something the fans would actually be happy, because I’m not happy that we don’t know what happens now that Ashley joined the other team. PLEASE, I’m dying for SOMETHING to come out. A MOVIE, A SEQUEL.. ANYTHING!!

Hi. Big fan of the show. Please don’t end it. Or at least tell us what will happen with Ashley and Conor’s relationship. I mean caitlin is right don’t leave it on a cliff hanger. I mean that’s just sad.☹️☹️☹️☹️☹️☹️☹️

Please bring back Gamers Guide with the same cast, why you would cancel a fan favorite show seems like a poor business decision. You haven’t replaced it with anything as entertaining.

i have currently died call me in 3000

Why do all my favourite shows end with cliff hangers at the end of the season and then, the next thing I hear is ”Oh, yeah that show is cancelled, sorry.”?

I’m very sad to hear that my favourite show has been cancelled. Everyday I would come home and watch it recorded or live. I’dlike to thank everyone who helped out in the making of this movie. I just have one question. Is the a chance that Gamers Guide will be renewed later on?? Really disappointed to hear this news as I just finished watching the second season and it ended so enexpected and on such a cliff hanger, I really hope to see this be renewed….

Good, this show was terrible. Nobody could act for their lives. Also, Kirby Buckets and Lab Rats spin-off were also cancelled. Looks like Disney XD is making the great decision to focus on animation instead of these poorly acted and written live action tween shows.

What do you mean they can’t act? Animation is worse then the loved shows that you call ‘tween shows.’ Animation doesn’t show emotion, at least with the actors, we can actually feel how they feel. This show was NOT terrible. It was amazing. Sure, I wasn’t interested with it at first, but when I actually started watching it, I got attracted by it. It made me fangirl with Connor and Ashley (Cashley) and love how they focused on teamwork when they were competing.

Yeah I’m super sad I mean the finale Conor and Ashley is about to hook up but not completely…..how about u make a movie wth cast member of Kicknit and gamers guide to pretty everything into a one special …’Kickni’t & Gamers Guide to Pretty much everything’ in a treasure hunt movie or secret agent and the moral of the story is the Bong of friendship

I honestly can see why. Thumbs of Fury being torn apart will of played a big role in whether or not it came back. And so many people never even gave it a chance. Too bad it’s fan base was smaller than it deserved to be

I just wish it didn’t end on a cliffhanger , i really wanted Ashley to get with conor to become a couple in a season so i hope you could mabe think of renewingit for a 3rd season

Fr that’s what i don’t get why a cliffhanger =(

i think that it was an amazing but i wish it didn’t end on a cliffhanger cause i wanted to see Ashley and conor get together as a couple . also we dont know if she changed her mind about working for conors old coach weather she comes back to conor or not ? and i really wanted them to become a couple.