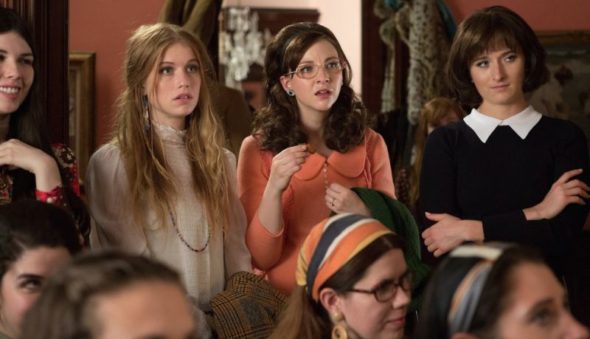 Good Girl Revolt was cancelled by Amazon after just one season on the streaming service, but the series is not dead yet. A new report from The Hollywood Reporter confirmed that the series is actively being shopped to other networks. The series has through the end of the month to find a new home.

I’m so pissed that Amazon cancelled this wonderful show. I feel like suing them for repressing women’s history! This show was a joy to watch on so many levels! I’m really hoping that another channel or network will pick it up Amazon doesn’t deserve it!

LOVE THE SHOW!! Praying for a season two. Have fallen in love with those girls.

What???? This show barely had time to be discovered by viewers before one can decide to cancel it.
Fresh idea, well written, thought provoking perspective, great cast! Must renew, there isn’t much worth watching these days, but this show was a nice surprise.

I agree! Am hoping will be picked up still. LOVED it and binge-watched!!! Will CANCEL AMAZON & go to other–except cable or satellite/digital.

one of my favorite ever. I’m an 80’s kid who should have been born in this era. This tv show was so good! Please don’t cancel it!

THIS SHOW WAS FABULOUS – SO WELL-WRITTEN AND WELL-ACTED – great stories with history that many of us lived in the 60’s, amazing to see what I had “forgotten” about. I binge-watched and though I will repeat seeing season 1, I WANT TO SEE THESE CHARACTERS DEVELOP. In my opinion, STREAMING TV SHOW ARE REVOLUTIONARY IN THEIR ABILITY TO GO REALLY DEEPLY INTO CHARACTERS AND THEIR DEVELOPMENT – showing integrity in their development and helping us understand them so much more deeply than ever before – in movies OR TV. I’D PREFER A GREAT STREAMING SHOW WITH 5-8 SEASONS TO… Read more »

Great show! Was the decision to cancel made by a man?!

NO DOUBT!! Have crabbed at Jeff Bezos about it… and if it is picked up, I will drop AMAZON & go to whoever picks this up–except I don’t do cable/satellite/digital. Just streaming!

No please don’t cancel!!! I loved this show! Reminds me of mad men but even better! I hope another channel picks it up quickly so they can start season 2 stat!!!!

I really enjoyed this show. I’m very disappointed that it’s been cancelled.

This was an excellent show and its depiction of unfairness to female workers was exceptional. I guess stupid reality shows and idiotic fantasy shows are the new trends. It is so sad being an elderly person and having to watch tv series and movies that make no sense with flying body parts and unrealistic characters. Please bring back this series.

This show was one of the best. Great music, costumes, acting, likable multifaceted characters, historic…..did I mention great music? Socially as relevant now as it was then…..I was 10 in 1969. My mom was in the women’s liberation movement. I loved the contextual information that gave more nuance to the historical content than what I knew as a 10 year old kid. I loved this show and Amazon really blew it bad by not renewing it.

Great show, definitely want it back. Wonderful setting, reminded me of the Mad Men series, but even better since the focus is on human rights. Well written, well depicted characters. I hope a better network takes it and more seasons follow.

Excellent series all around. Cancellation decision made by male executive.

Such A fantastic show! I watched it with my 24-year-old daughter and it was not only a great show, with really interesting characters and storylines , but educational for us to discuss what it was was like for women during that time (I was a high school student in 1969).
BRING IT BACK!!!
Highly Recommend!

Craziest decision since the cancellation of Firefly. Not too smart, Amazon, but your streaming is far below average anyway. May a better network get the show.