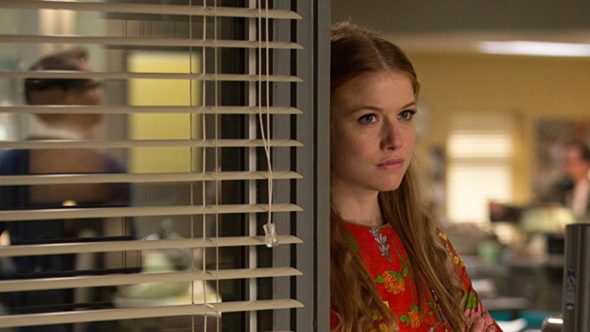 Given the current #MeToo movement, perhaps we should file this one under “Opportunity Lost.” Dana Calvo, creator of the cancelled Good Girls Revolt TV show, has announced on social media that there will be no second season of the period drama. Calvo went so far as to say, “It’s over,” after the pitch for a new installment has failed.

Good Girls Revolt originally ran for one season on Amazon, before being cancelled in December of 2016. Inspired by the real-life events chronicled in Lynn Povich’s book, The Good Girls Revolt (affiliate link), the drama starred Genevieve Angelson, Anna Camp, Erin Darke, Chris Diamantopoulos, Hunter Parrish, Jim Belushi, Joy Bryant, and Grace Gummer. In November, we reported Calvo and TriStar TV’s Suzanne Patmore Gibbs were pitching a different angle for season two than they originally made to Amazon, but even that didn’t change the show’s fate.

In the brief video statement below, Calvo confirms that “it’s official” that Good Girls Revolt (affiliate link) is not returning for a second season. She thanks fans for their “stone cold solidarity,” and says while “it’s over,” she keeps thinking about all the notes she’s received from viewers, since last fall, adding, “You all took what started out as a writing assignment and turned it into one of the most remarkable journeys of my life, so thank you again and happy holidays.”

What’s interesting is that, when Amazon first passed on a second season in 2016, before the #MeToo wave crested, it was reportedly because Amazon Studios’ founder Roy Price didn’t care for the show.

After the initial cancellation, Calvo even cited Price’s (non-)interest in the show as a reason for it ending. Nearly a year later, in the fall of 2017, Price was suspended and eventually resigned from Amazon Studios, reportedly because of sexual harassment allegations levied against him.

What do you think? Were you hoping that another network would save the Good Girls Revolt TV series? Did you think it should have been cancelled or renewed for season two on Amazon or another platform? Sound off, in the comments.

This is the most powerful depiction of women’s struggle for equality in the workplace. It’s a shame that it was cancelled. My hope is that another network will step up and bring it back.

Good girls revolt was one of the better Amazon shows. I just binged watched it and it’s great!

I’m just sick to learn there is no Season 2. I only recently discovered this show and binge watched it over two days. It is so timely, so well written and acted, just so perfect. How can it possibly be dropped? I’m incredulous and so very sad.

This show needs to be picked back up immediately! If not it will truly be a huge opportunity lost, So important in this current climate! Great cast well written I was hooked immediately please please please more good girls revolt!

Bring IT BACK, please. I have never seen a show before that actually documents even the subtle ways sexism works against a person. Such an important show!

Why not CBS take that show? I will not step down until this show is transferred to another channel.