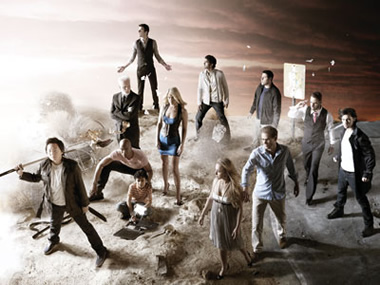 Sorry, Greg Grunberg. It turns out that Ali Larter might just be right. It seems that the Heroes wrap-up movie isn’t happening.

As fans know all too well, after NBC cancelled Heroes in May, there was talk about wrapping up the TV show’s storylines as either a movie or a mini-series. Despite the fact that some time had passed, series creator Tim Kring recently indicated he was still optimistic.

He said, “It looks like we’re really going to start talking about it now. The summer months in television are always about preparing for the Fall launch of all the new shows, so I totally understand why there hasn’t been a lot of discussion [until now]. Once the Fall season is launched, I fully believe that this discussion will get reignited in a very big way.”

Now, according to EW sources, NBC isn’t going ahead with the project, at least for the 2010-11 season. However, that may not be the end of the Heroes universe. Kring believes that the show’s broad premise allows for many different stories to be told in many different ways.

What do you think? If not onscreen, how would you like to see Heroes continue — as books, comics, animation, web shorts, or in some other form?

NBC If you don’t have the balls to finish the show. Then just let it go but be up front about it. Don’t screw with people. If its gone its gone. Man up no BS about well maybe this and maybe that. Just do it. Be advised I won’t pay one red cent to purchase anything. I bought the Blu Ray version of Dead like me, after they waited two years to get it done. Even with the digital copy and all the good stuff it wasn’t worth it and you know what it wasn’t up to par, a waste… Read more »

I would totally pay to see a heroes movie or read a book, comic or even online stories to reach a happy closure to this wonderful series. I felt a chuck of my soul die when I learned it had been canceled. I own all the series and I love them.

Oscar I’d rethink that. It will be nothing save disappointing if in fact that’s what happens. Sorry that’s just the way it goes.

I would pay to see a Heroes movie or anything that will give us fans a proper ending to this amazing show. It really sucks that NBC decided to pull the plug and not giving the show a chance to end the show properly. I just finished watching Heroes again on Netflix and I want more!

I was seriously disappointed in the way the series was just dropped entirely. It should have been wrapped up with a proper ending (if anything) but to just leave everyone hanging after investing so much time is just plain rude. I don’t care if it *is* “free” – if you’re going to tell a story don’t give a person a book and leave out the last chapter(s).

I’d pay to see whatever version there might be.

Get used to it. If they get enough fan mail pushing, you make get a remake in a couple of years or so. Buy it. I’d wait. By then it will have lost momentum and actors. They’ll move on.

People are still talking about this.
Their should be something to wrap up the series the last episode said to be continued…..
Apparently not

Don’t believe everything you read. I could say I’m Mary Queen of Scots. Doesn’t make it so.

I think that Heroes should become a motion picture. If they want to end it, why not end it on the big screen? First Season had 14 in half viewers. Last season had only nearly 7 million viewers. I think Universal Studios should make a movie. Hell, I will even write a movie script. There is no bigger fan of HEROES than me…

I think that Heroes should become a motion picture. If they want to end it, why not end it on the big screen? First Season had 14 in half viewers million viewers. Last season had only nearly 7 million viewers. I think Universal Studios should make a movie. Hell, I will even write a movie script. There is no bigger fan of HEROES than me…

Here in Brazil Heroes has many followers. Everybody is sad about the cancellation, two years ago and still now. There is a lot of people waiting for a wrap-up movie or such. I think NBC should sell the show to another channel, maybe more competent to go ahead.

I loved this show!!!!!! NBC u suck!!! All of us need closure and u are seriously f*cking us by not giving us any closure!! This show was cancelled two years ago and I just finished the last season and I’m so pissed off right now that u ended it with a cliff hanger!!! WTF!!! Something needs to be done about this!!! Im sure u pissed millions of ppl off and that’s not right!!!

Heroes was one of the best series i’ve ever watched, i looked forward to it every week and can still watch the episodes now with out getting bored, but you need to do something, another series a movie anything that can wrap up the story, volume 5 ended with to be continued, it was a great show and NBC made a huge mistake cancelling it.

Im 25 years old and i live in the bay area im in my carreer as a journeyman for local 104 sheetmetal workers. For the past three weeks i have come home and watched all the seasons on demand. Back-to-Back episodes for the end of my day, kind of like a treat for working hard that day. Tonight 8-8-2012 at 9:45pm i was devestated by the fact that comcast has no more episodes to view past the last one i just watched? so i jumped on here and started seeing signs of cancellation in 2010!!!!!! If i would have caught… Read more »

Net-flix has all 77 Episodes. You can even sign up for a month for free and watch the show. Afterwards you can sign up or not. for $7.99 you get your monies worth. Comcast sucks. They’re one of the 10 worst companies IN THE WORLD. Google it if you don’t believe me. How much are you paying them? And they just bought Universal for 18.1 or 18.7 BILLION dollers. How do you think they’re going to recoup that money?

Im 17 and have watched the Heros series over and over again and there needs to be a wrap up the series…it kills us viewers to not know what happens. Please talk to NYC and the creator about doing this for us. I believe that if u do it now you will catch the public by surprise and get us excited so please contact me and let me know

I am 11 years old, and I hadn’t started watching Heroes until around the start of 2012. I watched the first episode and was instantly hooked. I annoyed my whole family watching lots of episodes back to back every day. I finally finished the fourth season (volume five) a few minutes ago and was very shocked to see the “to be continued” at the end of it. I looked for more episodes, but I couldn’t find them. I googled the words “heroes cancelled”, and it listed when and why it was cancelled. I read the possible options for Tim Kring… Read more »

Reader
China (I'm serious, no joke, is my actual name)

I am outraged by the cancellation of Heroes. NBC should be ashamed of themselves. Heroes was one of the most popular TV shows at least on NBC. Ok, so first of all if they were gonna cancel it then don’t end it with the hugest bomb shell over in the whole series, so yeah, that’s really f*cking do*chey of them. The least they could have done is make a god damn movie to finish it, which why would they finish it, it’s f*cking amazing. So anyway NBC go f*ck yourselves and get sodomized up all y’alls asses.

Reader
China (I'm serious, no joke, is my actual name)

Almost forgot, dude look, Heroes was cancelled 2 years ago, and me and I bet millions of other people are still pist about it.

NBC…Hate you. You stopped a great series…What babies…NBC= “No BALLs Communications” You shut down a good thing for what??? To make people not trust NBC and to stop watching new TV series programs because your marketing people suk!…Spare yourselves the trouble and hire me to run **** around there and we can get some stuff done proper around there…Email me with an offer to show you how to make you the top money you seek to supply the faithful viewers & fans of good TV. scottsgraphics@yahoo.com P.S. There are plenty of TV series that could have been cancelled, but Heroes… Read more »