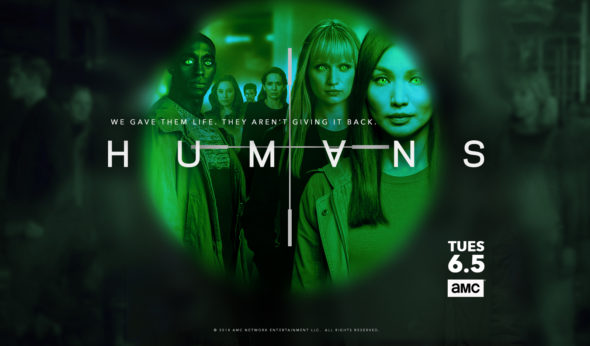 Despite a huge drop in the ratings over the previous year, the Humans TV show was not cancelled by AMC. Instead, the cable network renewed this co-production with UK Channel 4, for a third season. Can Humans perform any better in the Nielsen ratings race, this time around? Will Humans be cancelled or renewed for season four on AMC? Stay tuned. *Status update below.

An AMC sci-fi drama, Humans stars Gemma Chan, Ivanno Jeremiah, Katherine Parkinson, Tom Goodman-Hill, Emily Berrington, Colin Morgan, and Ruth Bradley. Holly Earl, Ukweli Roach, Mark Bonnar, and Dino Fetscher join the Humans season three cast. The yarn unravels in a parallel present, where the latest must-have gadget for any home is a Synthetic. What happens though, when the “Synths” are imbued with consciousness and free will? The artificial intelligence series explores the potential consequences of blurring the lines between human and machine.

For comparisons: The second season of Humans on AMC averaged a 0.14 rating in the 18-49 demographic and 462,000 million total viewers. It was down by about 65% and 61% respectively, over season one.

What do you think? Do you still like the Humans TV series? Should AMC cancel or renew this TV show for a fourth season?

Please please please renew Humans for a 4th season. The cast was amazing and the premise of the show is genius and very well produced. We were left on such a cliff hanger on season 3, with so much room for new and exciting material. Bring Humans back!!!!