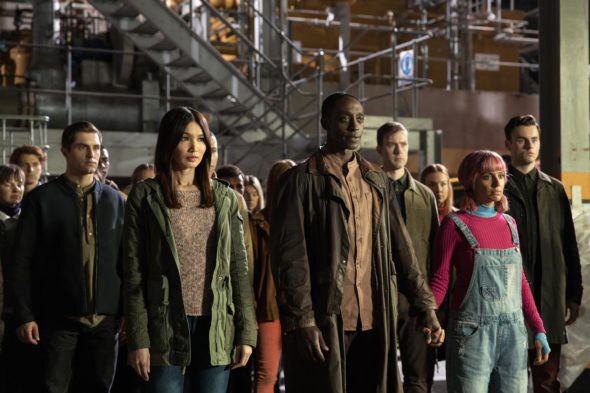 What do you think of the third season of the Humans TV show on AMC? As we all know, the Nielsen ratings typically play a big role in determining whether a TV show like Humans is cancelled or renewed for season four. Unfortunately, most of us do not live in Nielsen households. Because many viewers feel frustration when their viewing habits and opinions aren’t considered, we’d like to offer you the chance to rate all of the Humans season three episodes here. *Status update below.

What do you think? Which season three episodes of the Humans TV series do you rate as wonderful, terrible, or somewhere between? Should AMC cancel or renew Humans for a fourth season? Don’t forget to vote, and share your thoughts, below.

*5/20/19 update: The Humans TV show has been cancelled so there won’t be a fourth season on AMC and Channel 4.

I cant believe it’s been cancelled…HUMANS was so thought provoking and open so many things to think about plus the actors are ACE IN MY BOOK!!! but hearing it’s been canceled I’m boycotting AMC & WILL GET AS MANY FRIENDS AND NEIGHBORS TO DO THE SAME…. PLUS WHY THE HECK WOULD YOU DO JUST 18-49 YEARS OLD….YEAH I MIGHT FALL INTO THAT BUT FEEL LIKE IM IN A OLDER ONE BUT LOVE ME SOME HUMANS & THE DEMOGRAPHIC YOU WENT WITH, MOST THOSE IDIOTS PLAY SOME TYPE OF GAMING SYSTEM HALF THEIR DAY THEN DONT WATCH TV….SUCK YALL ENDED IT… Read more »

Please renew this show! It is the most addictive show I’ve ever seen! So relevant to our future! This show has drastically changed my mind regarding synthetic intelligence!

Humans is a seriously fantastic show, the plot and character developments are so compelling! This show needs to be renewed for a fourth season! LOVE IT

Unfortunate that HIGHLY INTELLIGENT TV programming is shuttered due to the Low Intelligence factors of those in the viewing audience. After all, look at the human beings audience viewers put into elected offices……… HUMANs … esp Season 3 … is BRILLIANT TV. Period.