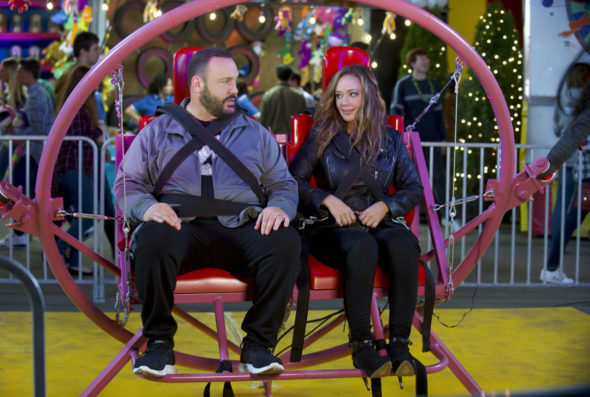 The show struggled some. I think Kevin and Leah together is great —- but it suffered because of the way the wife killed off and then trying to write the story line incorporating Kevin and Leah. I almost wish they were able to just end the one show and come back with a new show with Kevin and Leah or find a way to go from one season to the next more smoothly.

I enjoyed this show just like I enjoyed King of Queens. Kevin and Leah have great chemistry and they work together well to gather. I think their personalities work off each other very well.

My husband and I both really LOVE this show!! Please don’t cancel it!

I love, love, love this show! The chemistry between Kevin & Leah is fantastic!

I love, love, love this show! Great chemistry between Kevin and Leah! Please renew for season 3!

I wrote last year if you his wfe of first season was recast with that old swollened up lips has been o would whatch this show this season and i dID Not SO PLEASE CANCEL IT.

I love love this show and it got sooo much better with Leah Remini!!

Everyone I know loves the show- Kevin and Leah have great chemistry! Please renew for 3rd season. I also love Chale- please keep him in the episodes.

kevin can wait has been terrible since beginning of season 2 it is the worst show cbs has ever aired, leah remini wad a horrible addition

Kevin Can Wait is NOT funny, and very disjointed. The writing is terrible, and Kevin James over acts in each episode. The entire foundation, and story line of the show is very weak. Either revamp the entire show or cancel it.

The version with Leah Remini is awful. I do not want to see characters always arguing, and she denigrating in every episode. Was much funnier and enjoyable with the wife’s character. Big mistake getting rid of her.

Kevin Can Wait season 2 is terrible. Kevin James has gone Doug Heffernan. If there is a season 3 I won’t watch it.

Kill off Vanessa and, at the funeral, Kevin meets Donna’s twin sister. After dating for a short period, they marry, bringing back the original cast. If the Vanessa character is so important, she can be added in using “flashbacks” or “some type of subliminal messaging character”.