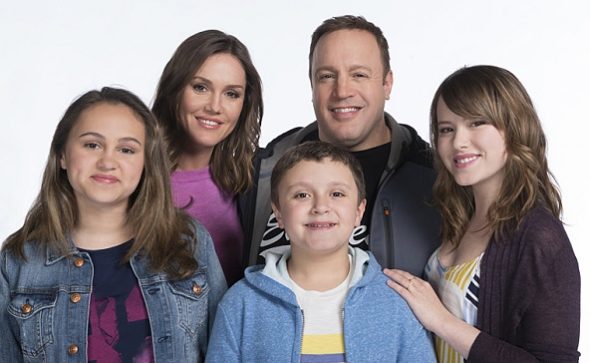 After 30 years on the force, Kevin’s looking forward to relaxing and spending quality time with his wife Donna (Erinn Hayes) and their young kids — Sara (Mary-Charles Jones) and Jack (James DiGiacomo).

When his oldest daughter Kendra (Taylor Spreitler) announces she’s dropping out of college to support her tech-wizard fiancé, Chale (Ryan Cartwright), Kevin knows his only choice is to move them both into his converted garage to keep her in school. Kevin was going to rent it out for extra money and now finds that he may need to find another job.

Kevin’s former work buddies graduated from the Academy with him, served on the force together, and retired at the same time.  They are Goody (Leonard Earl Howze), Kyle (Gary Valentine), and Duffy (Lenny Venito).

When the second season kicks off, Donna has died, and Kevin is working for his old partner, Vanessa Cellucci (Leah Remini), at her security firm.

Series Finale:
Episode #48, “A Band Done”
After a former bandmate talks Kevin into reuniting with their old band, Smokefish, with hopes of making it big, Vanessa realizes a chance encounter with the band in her past changed the course of her life. (Courtesy of CBS)
First aired: May 7, 2018

What do you think? Did you like the Kevin Can Wait TV show? Should CBS have cancelled or renewed it for season three?

Thank goodness…they took a great show season one and ruined it by bringing in Remini…if the wanted King of Queens 2.0 then they should have just did it. Adios amigo!

Loved the show. Leah Remini brought to the show what was missing. Will miss watching it.

Too bad they didn’t cast Donna’s character better from the start. I tried watching the first season but Erinn Hayes’ lack of chemistry with the other actors made it impossible. I’m glad the producers saw it too and removed her.

I stopped watching this show when Leah Remini became a full cast member. She’s not one of my favorites. If I want to watch the “King of Queens” repeates are always running somewhere. I liked the original premise of the show, now I cannot figure out what is going on. Sorry, not watching anymore. I really like Kevin too..

Kevin is trying too hard to be like he was on King of Queens, just not that funny any more

Love Kevin James. I have watched faithfully since season one, and it only keeps getting better. Great move bringing Leah Remini on to the show.

Looking forward to see this show every week , Finally a show without hints towards politics but just good every day live humor . I love it ! Kevin is the funniest !

Liked the first season with wife Donna. Kevin James can be very funny. Should of never made Leah Remini full time she just makes Kevin James character seem like an idiot instead of funny. Should be cancelled now that it has been ruined.

Has been down hill since they killed off the Mom. There was a good chemistry and new vibe. Now is only King of Queens 2, been there saw that – and its over.

show was much better with erinn hayes over leah remini

I Love this show, it’s one of the best, I love Kevin James with Leah Remini they are fantastic together, please keep this show………….LOVE LOVE

I think it has to renew another season, maybe, the third season.

Kevin Can Wait is the LEAST funniest show I have seen in quit some time. How this show stays on the air is mind numbing.

There is a fine line between Funny and stupid, Kevin Can Wait is the latter of the two !!!!