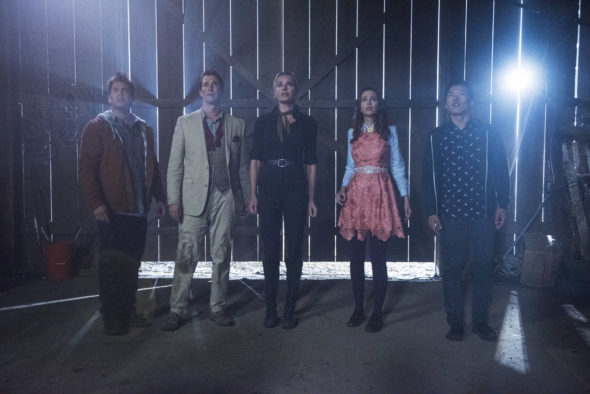 How long will the magic last? Has The Librarians TV show been cancelled or renewed for a fifth season on TNT? The television vulture is watching all the latest cancellation and renewal news, so this page is the place to track the status of The Librarians, season five. Bookmark it, or subscribe for the latest updates. Remember, the television vulture is watching your shows. Are you?

Airing on the TNT cable channel, The Librarians stars Rebecca Romijn, Christian Kane, Lindy Booth, John Harlan Kim, and John Larroquette, with Noah Wyle recurring as veteran librarian, Flynn Carsen. The series centers on the ancient organization dedicated to safeguarding an unknowing world from the secret, magical reality hidden all around. The librarians serve as the protectors of the world’s mystical treasures.

The fourth season of The Librarians averaged a 0.29 rating in the 18-49 demographic and 1.45 million viewers. Compared to season three, that’s down by 38% and 20%, respectively. Learn how The Librarians stacks up against other TNT TV shows.

The fourth season premiered with much lower numbers than last year and the averages are also lower. However, The Librarians is still doing pretty well when compared to the other TNT original series. I’d usually predict another renewal, but TNT has been repositioning itself as an edgier network, and I’m not quite sure The Librarians is still a good fit. I’ll update this page with breaking developments. Subscribe for free alerts about The Librarians cancellation or renewal news.

3/8/2018 update: The Librarians has been cancelled by TNT, but may be shopped elsewhere. Details here.

What do you think? Do you hope The Librarians TV show will be renewed for season five? How would you feel if TNT cancelled this TV series, instead?

I quit watching all TNT shows when they cancelled The Librarians. A wonderful show with drama, comedy and excitement without bringing sex and violence in! I just watched the series again and years later it still entertains me! TNT is known for cancelling the best shows on TV especially family friendly shows, shame on them!

I really love this series! I do not rewatch many series, but I will gladly keep rewatching this one. It would be fantastic to see more episodes and adventures of the librarians. (or even just more movies).