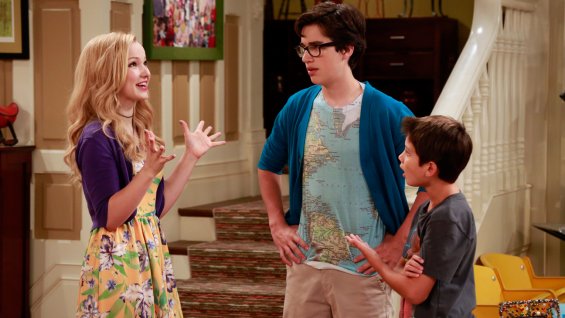 Liv and Maddie is nearing the end. This week, series’ co-creator Ron Hart revealed Disney Channel has cancelled the show after four seasons.

On his twitter, Hart said season four will be the end for Liv and Maddie. Though, Disney Channel has yet to announce an official cancellation.

Take a look at Hart’s announcement below:

Thank you for your amazing support this season. We hope to see you all back this fall for #LivAndMaddie #Season4 pic.twitter.com/QSWnX0lCkg

The fourth and final season of Liv and Maddie premieres this fall on Disney Channel.

What do you think? Do you watch Liv and Maddie? Are you sad to see it end?

My daughter and I watch this show together so sad to see it end. Great show!

Me and my daughter are mad first we found they cancelled girl meets world now Live and Maddie what’s wrong with them that are two good shows. Me and my daughter love siting down watching our favorite shows together. They should ask the viewers what they want.

The problem with the way Disney does things is that it takes a show a season or two to get into its groove. Every time they introduce a new show, the writing and acting is terrible at first. Then everyone hits their stride and it starts to get good, and then the next thing you know it’s being cancelled.

Monica is so right

You keep saying what you want

I am so sad Liv & Maddie has been canceled; I hope Disney changes its mind and renews it after all. Although, with it canceled, it will give Dove Cameron the chance to show her talents on many other shows. Enjoyed watching her in Hairspray Live and, of course, in Descendants. But she really shows her diverse talent in Liv & Maddie.

I hate you not gonna keep the show going my daughter got me watching it and even my two sons like watching it got to keep it going I hate when tv stations do this get people sucked in and then cancel it .

i just hope liv and holden get back together in season 4…if not i will be so sad…i just hope it ends well tho…#heartbreaking that liv and maddie is coming to an end….#cant wait for voice a rooney and end a rooney

Of course people are/will be sad. But all should be used to it by now, with their dreaded rules for whatever reason. Its just sad to see the people that work so hard to make a show worth watching, and poof gone! We should all realize its just how Disney does things, whether we like it or not! But then again, maybe someday if enough peeps complain, they will finally change that rule!

i know right..that was how they ended many other cool shows too…

Or – maybe Disney will greed itself out of existence.

Here sign this petition http://www.ipetitions.com/petition/liv-and-maddie-season-4. Maybe if we get enough signatures we can keep the show going.

My 10 year old daughter loved this show never missed it. So sorry it is going off.

This was my child’s favorite show until we visited Disney World in Orlando and saw Dove Cameron and her boyfriend (Ryan McCarten) standing against a wall in the park. Neither one was in disguise so we were shocked that no one knew who they were. We researched (2015) later and found out they were there for some summer promotion by Disney. My son recognized “Diggy” and we asked for a picture with him and was denied rather rudely by McCarten who acted as if he didn’t know what we were talking about. He actually summoned for a cast member who… Read more »

wow…i never even liked diggy from the start..i know holden (jordan fisher) is not like that real life…i dont even know why dove cameron chose ryan

So sad to hear it’s ending this was my favorite Disney channel show I’m super sad and so is my little sister.