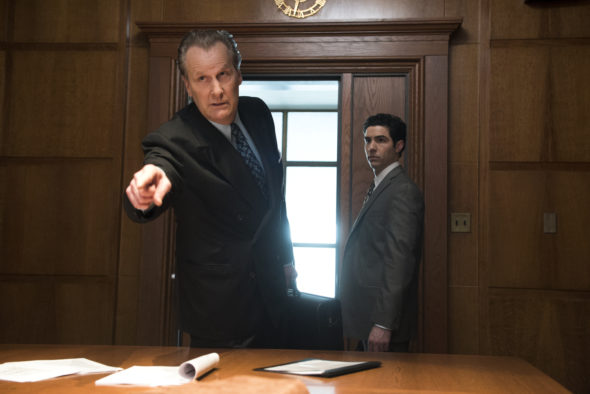 How goes the struggle between the FBI’s John O’Neill and the CIA’s Martin Schmidt, during the first season of The Looming Tower TV show on Hulu? As we all know, the Nielsen ratings typically play a big role in determining whether TV shows are cancelled or renewed. Hulu and other streaming platforms, however, collect their own data. If you’ve been watching this TV series, we’d love to know how you feel about The Looming Tower season one episodes. We invite you to rate them for us here.

A Hulu counter-terrorism drama based on the Lawrence Wright book, The Looming Tower stars Jeff Daniels, Tahar Rahim, Wrenn Schmidt, Bill Camp, Louis Cancelmi, Virginia Kull, Ella Rae Peck, Sullivan Jones, Michael Stuhlbarg, and Peter Sarsgaard. The story explores the rise of Osama Bin Laden and Al-Qaeda, beginning in the late 1990s. It also delves into the issue of whether the tug-of-war between the FBI and CIA could have accidentally helped set the stage for the tragedy of September 11, 2001 (i.e. 9/11). As the personal and professional lives of the FBI’s New York-based I-49 Squad and the CIA’s Alec Station in Washington, DC reach a crescendo, Al-Qaeda operatives set to work in the US, to bring their evil plans to fruition.

What do you think? Which season one episodes of The Looming Tower TV series do you rate as wonderful, terrible, or somewhere between? Should Hulu cancel or renew The Looming Tower for a second season? Don’t forget to vote, and share your thoughts, below.

I’m not happy how the O’Neill character is representing the FBI ! He smokes , he drinks , he’s a womanizer!
I don’t think that’s what FBI agents do ; they are too busy doing surveillance .
R u trying to say agencies do not share info ? Probably true . But they have reasons for that

Loved this show! Such an eye opener as to what went on in history.