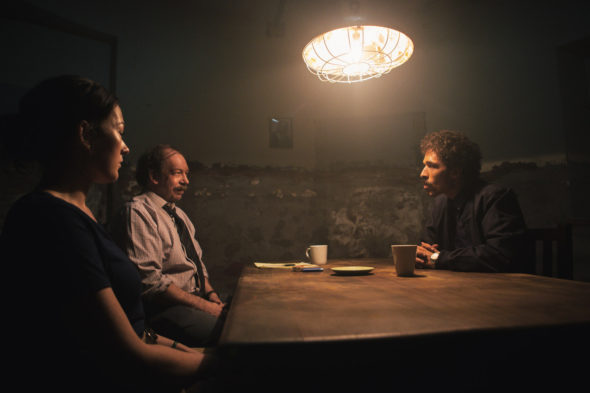 Is the CIA still at odds with the FBI? Has The Looming Tower TV show been cancelled or renewed for a second season on Hulu? The television vulture is watching all the latest TV cancellation and renewal news, so this page is the place to track the status of The Looming Tower, season two. Bookmark it, or subscribe for the latest updates. Remember, the television vulture is watching your shows. Are you?

A Hulu counter-terrorism drama based on the Lawrence Wright non-fiction book, The Looming Tower stars Jeff Daniels, Tahar Rahim, Wrenn Schmidt, Bill Camp, Louis Cancelmi, Virginia Kull, Ella Rae Peck, Sullivan Jones, Michael Stuhlbarg, and Peter Sarsgaard. The story explores the rise of Osama Bin Laden and Al-Qaeda, beginning in the late 1990s. It also delves into the issue of whether the tug-of-war between the FBI and CIA could have accidentally helped set the stage for the tragedy of September 11, 2001 (i.e. 9/11). As the personal and professional lives of the FBI’s New York-based I-49 Squad and the CIA’s Alec Station in Washington, DC reach a crescendo, Al-Qaeda operatives set to work in the US, to bring their evil plans to fruition.

Unless they decide to publicize its viewership, it is hard to predict whether Hulu will cancel or renew The Looming Tower for a second season. It’s billed with the fuzzy “limited-event series” terminology, and is based on a non-fiction account of a historical event, so it could end up being a one-season mini-series. By the same token, the events of September 11, 2001, and its aftermath, still loom large over both United States and the world, so the story needn’t end here. I’ll keep an eye on the trades and update this page with breaking developments. Subscribe for free alerts on The Looming Tower cancellation and renewal news.

4/18/18 update: The first season finale of The Looming Tower has been tagged as the “series finale” so there won’t be a second season.

What do you think? Should Hulu have renewed The Looming Tower TV series for a second season? Is there more story to tell, or does it work best as a mini-series?

Please make a second season, if the characters who was in the first still had an active roll in the story/history, it would fun to follow them as well as new characters.
Jeff Daniel’s role will however be hard to flow…

Please keep most of the behind the scene personal because the first season was !

I just watched The Looming Tower and it should be a second season.

There definitely should be a Season 2 … would like to know more about the congressional hearings.

It should DEFINITELY be renewed for a second season! There’s a lot more to tell and I’d hate to see it end like this.