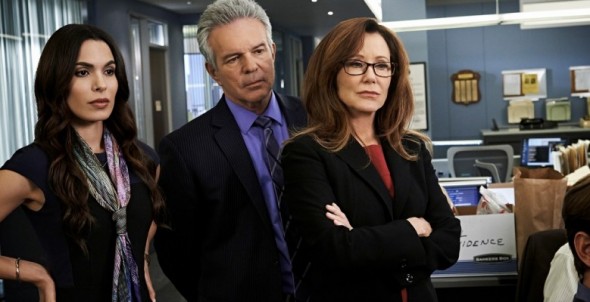 Captain Sharon Raydor and her team will be back next summer. TNT has renewed their popular Major Crimes TV series for a fourth season of 16 episodes.

Michael Wright, president and head of programming for TNT, noted, “Major Crimes continues to be one of the most enduring and popular crime-drama franchises on television.”

So far, the current season has been averaging 4.98 million viewers each week, up about 5% when compared to season two’s ratings. There are 19 episodes in season three and only 10 of them have been scheduled for this summer so far.

Today, the cable channel also renewed The Last Ship and Falling Skies for next summer. The latter will return for its final season.

What do you think? Do you like the Major Crimes series? Are you glad that it’s coming back?

I really like Major Crimes and all the actors. I hope it stays on the air.

No, I am not glad to see it return. I am tired of Rusty and Mary McDonnell. No spark in the show.

Great show hope it never ends I love all the characters !!!

Major crimes is one of the best tv shows ever. Love it

I LOVE MAJOR CRIMES !! I HOPE YOU CHANGE YOUR MIND ABOUT CALLING IT QUITS AFTER THE FOURTH SEASON. THERE ARE SO MANY AVENUES YOU COULD GO DOWN AND SO MANY SUB PLOTS YOU COULD EXPLORE. I WOULD LIKE TO SEE A FIFTH SEASON; SO THAT YOU COULD TIE UP ANY LOOSE ENDS; AND LEAVE YOUR AUDIENCE SATISFIED. I WOULD ALSO LIKE TO SEE ANDY & SHARON GET MARRIED. I’VE SAID IT AS MANY WAYS AS I KNOW HOW;KEEP MAJOR CRIMES ON THE AIR. THANK YOU , DIANE ROSEMARY HUNTER

I HAVE NOT SAID THAT BEFORE. I THINK YOU HATE MAJOR CRIMES & THAT IS WHY YOU HAVE ERASED MY COMENTS THREE TIMES. YOU ARE VERY STUPID NOT TO RELAY A FANS MESSAGE !! T.N.T. WANTS TO KNOW WHAT THE PUBLIC THINKS; & WHO ARE YOU TO MAKE DECISIONS FOR ME. DIANE ROSEMARY HUNTER

What does that mean.

Sharon, I am really going to miss you, & the guys. Major Crimes is like a friend I visit every week. I have purchased season 1& 2; I am looking forward to season 3 & 4. Please keep me in touch if you are planning on doing another series or a play in the city . We have never met face to face but I feel like we are friends. I have been PRAYING for Major Crimes to hit at least 5 seasons; but I’ll take what I can get. THANK YOU SO MUCH FOR ENRICHING MY LIFE. IN JESUS… Read more »

Major Crimes is my favorite show – can’t wait for its return!

I can’t wait for the best crime show on tnt. Next to Chicago PD, it’s a great show. I can remember when I could not stand Capt. Sharon Rayder. Now she’s the best on the show. Andy and Sharon, what a great story line. Rusty (Patrick) Louisiana proud!

We are anxiously awaiting the new season of Major Crimes. It has enduring characters not found in other crime shows. Always interesting plots with twists and turns.

A SHOW IS ONLY AS GOOD AS ITS WRITERS. I EXPECT GREAT SCRIPTS !!!! THEY HAVE SO MUCH TALENT ON THIS SHOW. THE MORE MYSTERIOUS THE BETTER; AFTER ALL THAT RUSTY HAS BEEN THROUGH ( DO YOU HAVE TO MAKE HIM GAY ) I THINK IT WOULD BE VERY POSITIVE IF HE LOOKED AT BOTH AND ALL SIGN’S ( PRO & CONS ) THEN MADE A DECISION TO GO STRAIGHT. WE ALL KNOW THAT SHARON LOVES HIM; & THAT RUSTY LOOKS UP TO THE SQUAD & RESPECT’S THEM. IF THE CLOUSER WAS A SUCCESS; MAJOR CRIMES COULD BE A BIGGER… Read more »

WHEN I HEARD JAMES DUFF DECIDED TO MAKE A CROSS-OVER, CALLED MAJOR CRIMES; I WAS THRILLED. I LOVED THE CLOSER, CAST & ALL; BUT I WAS SO EXCITED ABOUT THE POSSIBILITY OF TAKING THE SHOW FURTHER. THIS SHOW HAS SO MUCH POTENTIAL THAT EVEN I COULD MAKE IT A HIT. YOU NEVER CONSIDER THE 30 TO 55 RAGE OF VIEWER.; THAT IS VERY SAD BECAUSE YOU ARE THROWING A DIAMOND IN THE GARBAGE DISPOSAL ! EVERY CAST MEMBER IN MAJOR CRIMES EXCEPT 4 RUSTY IS AT LEAST 55 YEARS OR OLDER. I HAVE ALREADY PURCHASE VOLUMN 1 & 2 &… Read more »

Major rimes is both my and my husband’s favorite crime show. It’s intelligent, quick moving, pertinent in todays news and all of the cast members are great!

I love MAJOR CRIMES !!!!! So glad it has been renewed. Hope for many seasons to come. Love the whole cast.