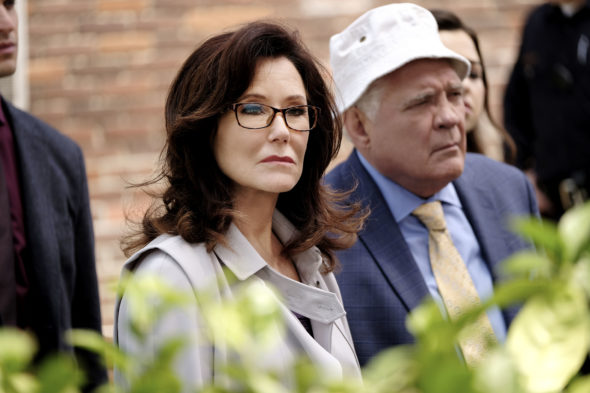 Major Crimes just wrapped its sixth and final season a few days ago. Recently, star Mary McDonnell wrote a Variety column about the end of the TNT TV show.

In the article, McDonnell addressed the shocking reveal of her character’s death in the final season of Major Crimes:

So losing her, I think, felt like a kick in the solar plexus to a lot of amazing women and men out there. That was hard to witness. But I read a lot and tried to understand. I am deeply grateful for all of it, and it has changed me somehow. I’ve never experienced anything quite like this in my career. I will be studying it for a long time to come.”

Later, McDonnell expressed how grateful she is for the character Sharon Raydor and for the TNT series overall:

All in all, the experience of playing Sharon Raydor has taught me more about leadership, communication and public engagement than anyone I’ve ever played. I will always be extremely and sincerely grateful to James Duff for creating this remarkable woman at a time when, culturally, we needed her. And I am grateful that James never allowed Sharon to depart from her moral center. Sharon mattered in ways both obvious and mysterious. And I miss the hundreds of people — the cast and crew — who gave their hearts and souls and talents and time to this story for many years. I miss them all.”

What do you think? Are you a fan of Major Crimes? Were you happy with the way the series ended?

I am totally upset with the cancellation of Major Crimes and especially hurt at the death of it major character, Mary McDonnell. She was a complete person. A wonderful wife, mother and Commander at her job which in this day needs a strong women, lover mother and boss. Bad choice in canceling such a piece of family entertainment

I really hated to see the show end. Always looked forward to each show. Loved the characters especially Sharon Raydor. Was disappointed they had her die after seemingly giving her such happiness. Another good show gone.

I’m sad it ended… I’ve been watching since the beginning when it was The Closer with Kyra Sedgwick Brenda in charge with Fritz❤️ I hated when that show ended and now Major Crimes another good show gone!

I am so sad that this show has come to an end. I never missed an episode. I wish the cast well and hope to see them in new roles!!

No, I am not happy this show ended. There’s few shows that give one the feeling of family. I love these kinds of programs. And so another great show bites the dust! Why get hooked when they will end. At least the higher ups gave us a satisfying ending. I hope there is a spin off, but I’m not going to hold my breath.

I am so extremely sad that this show has ended. There are very few shows that I have been emotionally involved in. The other being “The Closer”. I pray, hope and will continue to advocate for a spin-off. I have no TV shows that I look forward to watching as I did with Major Crimes.

I do not know why they had to have Sharon pass. I was pleased that Rusty shot and finally killed Philip Strough! My husband and I still would love to see the series come back because it was the best show on your network.

I totally agree. I don’t see the point in killing her off. Why wouldn’t they let her see Stroh get killed and Rusty and Gus happy together? Totally senseless. I’m grieving the loss of this show.

I was very sad that Major Crimes had its final season. To me it was one of the last quality shows that TNT aired on their channel. I was very shocked that she died, and very sad because she was a really quality person on the show. I have to mention that the wedding was beautiful, and Sharon was breathtakingly beautiful during the wedding ceremony. I will miss Major Crimes and all of the characters that were on the show since The Closer.

I was very upset that they ended this show. Loved the stories and all the characters. I don’t understand why TNT keeps cancelling all their good shows?

I hated the final season, for many reasons. It actually seemed to be based on something else. Maybe someone asking for more money? I don’t know. I do know that I hated the season. 1) The death of Sharon with 4-5 episodes left? STUPID. 2) Rusty shooting the killer, and Provenza covering… STUPID. 3) How little Julio and Amy were used and yet those two fill ins that showed up and basically did NOTHING that Julio and Amy could not have done. Seemed like they did not want the originals to do their job… 4) Buzz, I hated him this… Read more »

I was sad that this quality show ended. TNT is leading the pack on very great drama. I’m looking forward to The Alchemist. Great book from Caleb Carr.

It was sad to see it end ;I really loved the show and it really annoys me that TNT cancelled it . It wasn’t expensive to make, it had a very loyal audience which pleaded with TNT to retain it ,TNT’s own “final season” press release notes that Major Crimes “has consistently ranked as one of cable’s most-watched drama series.” TNT’s cancelling Major Crimes reminds me of the cancellation of the original Star Trek

It was sad to see the show end with Sharon’s death (Mary’s character) but the ending of serial killer was welcomed !