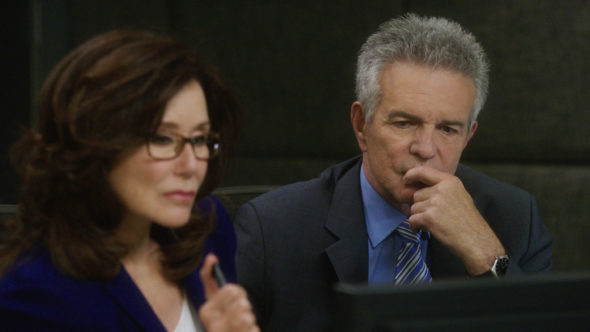 Is it the end of the line for Commander Sharon Raydor and the detectives in the LAPD’s Major Crimes Division? Has the Major Crimes TV show been cancelled or renewed for a seventh season on TNT? The television vulture is watching all the latest cancellation and renewal news, so this page is the place to track the status of Major Crimes, season seven. Bookmark it, or subscribe for the latest updates. Remember, the television vulture is watching your shows. Are you?

In season six, the Major Crimes storyline is more serialized. The squad is now struggling to solve mysteries and murders amidst political conflicts. While Commander Sharon Raydor (McDonnell) grows accustomed to her new boss, the detectives question the justice system’s changing priorities. They will also learn to accept all kinds of risks, as they ready themselves for the imminent return of Phillip Stroh (Billy Burke)..

The sixth season of Major Crimes averaged a 0.25 rating in the 18-49 demographic and 2.15 million viewers. Compared to season five, that’s down by 33% and down by 33%, respectively. Learn how Major Crimes stacks up against other TNT TV shows.

Since TNT announced it will end with its sixth season, I won’t fritter away time wondering whether Major Crimes will be cancelled or renewed for season seven. While creator James Duff hopes there is a chance for a seventh installment, perhaps on Netflix or elsewhere, he recognizes that’s a business decision which involves branding, as well as audience size. Personally, and with all due respect to disappointed fans, I expect I’ll feast on this crime drama, sooner rather than later. Picking up a TV series that was cancelled in its prime is different than picking up one which has had more of a full run than most series get. Subscribe for free Major Crimes cancellation or renewal news.

What do you think? Is season six the right time to end the Major Crimes TV? If it were up to you, would Major Crimes be cancelled or renewed for season seven?

you have got to bring major crimes back. The characters are fantastic,plus we the fans have to find out what happens with stroh. We love All the actors,they are so wonderful. So, We Are Asking PLEASE,PLEASE bring Major Crimes BAck to all the devoted fans that just Love it & look forward to watching it every wk. “Thank You”

With all due respect, I think a police procedural is a bit different than your run of the mill show in regards to “prime/fullrun”. If you look at the life of The Closer/Major Crimes franchise as compared to Law and Order (30 yrs) and NCIS (20 yrs), TC/MC is still a pre-teen. If you look at the numbers for the show prior to Reilly desperately trying to kill it, it far exceeded the performance of ANY of his higher price tag shows that require a higher threshold to just hit the recapturing of production costs let alone profitability. MC could… Read more »

Please bring it back! I’ve watched this since “The Closer” started and love the show, except for all of the gay scenes.

Please, more Major Crimes . Great show, wonderful cast, engaging stories and characters – everything you look for in a series that you PLA N to watch.

I still am hoping someone will help keep Major Crimes continue.

Sad to see the show go. Really enjoyed watching and was very sad that Rader died before end. Hope they bring it back an d not try to replace Rader with Camila Paige. I would select Provenza and Fritz.

Wow, really sad to lose this show. Morphed from The Closer, both shows were always worth looking forward to. I cannot believe that viewers were down 34%. Maybe the numbers are skewed? Doesn’t make sense.

Common sense doesn’t seem to be so common these days… There’s a pretty large TV watching demographic out there who are not getting the time of day anymore. Odd, because they’re the ones who have more time to watch TV and also have money to spend. This is a great show with a great ensemble cast that makes watching TV worthwhile. Sure, it is a business decision to cancel the show; however, it can also be a business decision to keep Major Crimes. I still believe in miracles and hope somebody will develop that common sense and pull a rabbit… Read more »

I have enjoyed Major crimes for years. Had also enjoyed The Closer. Sorry to see Major Crimes go off the air. I wish it would co ntinue

Love the program as long as the scenes don’t include Rusty. For several years I fast forward through any scenes with Rusty. Must be a relative of someone in control as he is a terrible actor.

Major Crimes is one of the best shows on tv!!!! Just as shows get interesting, characters meld, and stories are current and interesting…..they get cancelled! Don’t let this wonderful, entertaining show be cancelled!

Major Crimes is one of my favorites. I have watched every episode, including all episodes of The Closer.
RENEW MAJOR CRIMES!