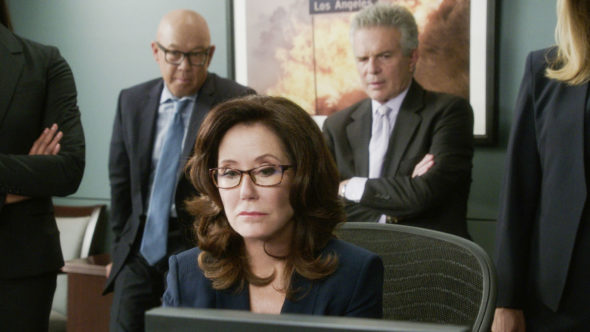 Yesterday, TNT announced its Major Crimes TV show would end with the upcoming sixth season. Now, creator James Duff, and star Mary McDonnell are reacting to the news that Major Crimes is ending, and it sounds like a cancellation to us. Check out their reactions, below, and let us know what you think.

On Facebook, Duff makes it clear that the decision to end Major Crimes was not his idea and was not a creative one. In addition to saying he does not want to leave the drama series, Duff says, “The actors, the writers, the producers and our talented crew would have held on as long as we were relevant.” He also goes on to thank the viewers for following Major Crimes even as it was bounced from timeslot to timeslot. Check it out.

McDonnell, who has starred as Commander Sharon Raydor since the TV show premiere, says she is not surprised that TNT cancelled Major Crimes, saying, “The writing was clearly on the wall.” As you can see in her Instagram post, below, while she is proud of what they’ve accomplished, she is still trying to make sense of the cable network’s choices.

Major Crimes: A Look at the Ratings

Although the sixth and final season of Major Crimes does not premiere until the end of October, and the show’s Nielsen ratings did drop off last year, it remains one of TNT’s strongest TV shows.

The fifth season of Major Crimes averaged a 0.38 rating in the 18-49 demographic and 3.19 million viewers. While that is down by 26% and 11% (respectively) over season four, it still beats out most of TNT’s original, scripted TV shows.

In season five, it drew a larger total viewership than any other original series on the cable network. In fact, Major Crimes‘ average total audience surprassed the third season of The Librarians, by more than a million viewers and the fourth season of The Last Ship, by about 1.5 million.

In terms of its demo ratings, Major Crimes‘ ranks third out of TNT TV series. It comes in right after The Librarians and the new crime dramedy, Claws.

What do you think? Are you a fan of the Major Crimes TV show? Is it ending at the right time? Should TNT have cancelled or renewed this TV series for a seventh season?

Having just started watching Major Crimes and am very saddened to see that it will be no more. As I didn’t enjoy watching The Closer, I chose to overlook MC’s – silly me 🙁

This is so disappointing. We have watched the show since the very beginning, recorded it every week. These were people you could relate to and felt as if you really knew them. Such a shame that the quality shows are being cancelled and trash shows are replacing them.

Take Major Crimes to another network with same cast and crew. Sharon Raydor’s death was a hoax to fool the bad guys. Be creative in bringing her back. Need Major Crimes. TNT really screwed up in this move.

My husband and I really enjoyed watching Major Crimes and The Closer before that. We are sadden that it has ended. We are hoping for another spinoff with all or most of the actors return. I hate it when good shows end.

******** for cancelling this show. Ratings were better than lots of others that are still airing.

I think this is a huge mistake as it was one of the best shows on Tuesday night why do you insist on ending GOOD shows or some of these creepy things not all people like zombies and monsters, a good cop show is better than any of them one of my favorite shows of all time was NYPD Blue a real program that you could watch and not toss your cookies while doing so

I loved ‘The Closer’ and ‘Major Crimes’ and don’t know what the network is thinking. There are so few quality dramas on the networks that are believable and that includes NBC & CBS. TNT viewership will surely suffer! Don’t cancel Major Crimes because I will not watch anything else on TNT.

I love Major Crimes and looked forward to every season. Please don’t cancel.