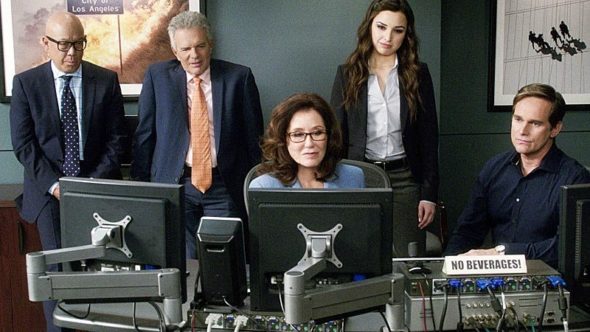 When The Closer TV show ended in 2012, fans of the Kyra Sedgwick crime drama could take some solace knowing that many of the characters would stick around via the Major Crimes spin-off. Soon, it will be time to say goodbye to that series as well.

TNT has announced that a seventh season renewal won’t be coming for Major Crimes. The sixth and final season will kick off on Halloween, October 31st, at 9pm (ET/PT). The two-episode series finale will air on Tuesday, January 16, 2018.

“Major Crimes has successfully navigated the many challenges that arise with a spin-off; the primary mission of which is staying true to its core DNA while expanding into unique territory all its own,” said Sarah Aubrey, executive vice president of original programming for TNT. “From Brenda Leigh Johnson to Commander Sharon Raydor, the cast and crew have done a phenomenal job of creating enduring characters – many of whom are celebrating 200 episodes together this season.”

This year, the series takes a serialized turn as the squad struggles to solve mysteries and murders surrounded by complex political conflicts, attempting to sidestep controversial issues as they track down three lethal murderers. As Cmdr. Sharon Raydor grows accustomed to her new boss, Assistant Chief Leo Mason, the detectives find themselves questioning their faith in the rapidly changing priorities of the justice system and their ability to reason through difficult changes. The emotionally gripping season will treat fans to an array of milestones from celebrations of love to periods of loss. Finally, they must accept the necessity of risk, in all its different guises, as they prepare to face the increasingly undeniable return of Phillip Stroh (guest star Billy Burke).

“The whole company of Major Crimes is dedicated to making 2017-18 the best season yet,” said series creator, James Duff. “We will finish our long run on TNT with a finale worthy of our loyal viewers and their years of unstinting support.”

Since its chart-topping debut in 2012, Major Crimes has consistently ranked as one of cable’s most-watched drama series. In its most recent season and spring run on TNT, the series reached an average 7.7M viewers per episode across linear, VOD, and digital platforms.

What do you think? Are you a fan of the Major Crimes TV show? Is this the right time to end the series? Would you have watched season seven?

Why would you ever cancel this show??????

This was a great show!! I’ll really miss it!!

loved this show. so sad to see it ending. hope it will come back

What a stupid move TNT.

Shame on the people responsible for ending one of the best programs in the history of television! Let us boycott TNT!

Very sad to hear this I have been watching since the very beginning with Brenda Lee, its a very good show and I will miss it dearly, a very sad time but I wish the actors well

This was a popular show with many interested in this genre. The strong cast, creative and thoughtful plots, character relationships made it a success. Terminating it, TNT loses one of its best quality draws for a police procedural with depth. They did not have many programs with a loyal viewer base and blew it in my opinion. Good bye TNT.

I wish it would never end. The chemistry is amazing! Love the characters & all the personal back & forth. Wish miss all of the characters for a LONG time.

I agree I wish it would never end I love it

I would watch Major Crimes forever! So sad it’s ended. Loved the actors and their chemistry. Show held lots of humour and drama and my husband and I must watch the reruns at least 4 times each!XidfI

Yes I would have watched season 7 absolutely loved the show.

We love Major Crimes. We found it late & are watching every episode on Bravo to catch up!!!! Great show!!!! Sure wish you wouldn’t cancel it.

would have watched many more seasons. cannot understand that with so many poor shows a very good one with high ratings gets canned

Yes I would have watched season 7. I love this show. Love the cast. I’m gonna be sad when it ends.

Will miss is terribly

I enjoyed it the cast was great together. I hated to see it end The handling of Shannon’s death and service was well done I cried. Some how I missed the very last one and can not find it on demand and can not believe we are being changed to see the shows. will they rerun the last ones?