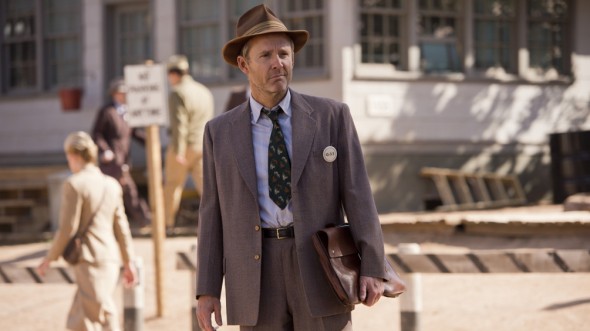 We really enjoyed season one of Manhattan. What an intelligent and fascinating series. I’ve always been so curious about the people involved in the creating this bomb. The tv series Manhatten does a good job at conveying the complexity of emotions that the people involved must have been feeling. We can’t wait for season two.

Enjoyed the first season. Glad this series was renewed. Dr. Winters is interesting character — driven to succeed in proving his theory on the proper device to be developed. Nice period piece. Although virtually all characters are fictional, the pressures between the scientists attempting to develop the bomb, along with the effect on their personal lives and relationships, is a compelling story. Look forward to purchasing this on bluray (which I did for Season 1).

Lest Y’all might have an interest in Manhattan’s “backdrop”.
“She is in charge of designing the style for sets, locations, graphics, props, lighting, camera angles and costumes, while working with the director and producer.”
An article from The Albuquerque Journal yesterday: http://tinyurl.com/pwad6ud

My family and I loved Season one of Manhattan. We did know about this secret and important mission nor of the brilliant minds from all over the world that came to the United States, specifically Los Alamos, New Mexico, to build the bomb. I wish WGN would launch a massive media push for Season two. The younger generation may not be interested in this history, but should be. My generation, Baby Boomers, need to know about this series. By the way since watching season one, we have been reading historical accounts and watching documentaries regarding Manhatton and are fascinated by… Read more »

Love this show!! While I know this show takes dramatic license I also like to think that I am learning something about American history. Keep up the good work WGN 🙂

– Oct. 13th at 9p ET is the announced date for Season 2!
– Considering how few found the show, it was nominated today for “Outstanding Main Title Design”! Whoopee…LOL
– Yesterday, 7/16, was the 70th Anniversary of the first testing at Trinity site. Hope this link works http://www.abqjournal.com/613151 for an interesting fallout….story.
– Being born in a place that “didn’t exist”, your birth certificate read that you were born at PO Box 1663, Santa Fe, New Mexico. For other Qs&As/Trivia: http://tinyurl.com/kme3924

Thx for the info Bob!!

Danada Kris!
Per your noting: “While I know this show takes dramatic license….” I hope you had a chance to scroll through all the postings to find that the Los Alamos Historical Society “spies” on the episodes over pizza and posts add-ons/corrections here!!!! http://www.losalamoshistory.org/manhattan_discussion_intro.htm Scroll down to click on dates.
Speaking of spies, don’t overlook this at your library or http://tinyurl.com/nppvh8w including reviews.

Hmmm….while we all know the outcome of WWII, perhaps some may have an interest in what became of atomic weapons from then till the end of the Cold War? Besides Los Alamos National Lab which continues to bustle with research today, down in Albuquerque is a counterpart lab called Sandia National Lab. (FYI: ABQ is at approx. 5000 ft. On its eastern edge is the 10,000 ft Sandia mountain range. Spanish “sandia” means “watermelon” and the range is so named for the color it turns at sunset especially in winter, e.g. http://tinyurl.com/n6cogn8.) While waiting for Season 2 in Oct Y’all… Read more »

I can not wait until the next season; this is one of the best series out on TV.

I loved the recent series Manhattan and sincerely hope it will be around for a long time. I was born just before Pearl Harbor and my father served in the navy —and spent 3 years in a veterans hospital afterward. I truly believe younger generations should better understand that their freedom today was insured by the brave boys—yes, boys— who fought and died in terrible conditions ,by those dedicated scientists who created the bomb (horrible as it was), and by a president who made an agonizing decision to use it. This series seems to be very accurate in its TV… Read more »

Love the show. So glad to know it was not cancelled!

Rachel Brosnahan, who plays Abby Isaacs in Manhattan, just initiated the rescue of an abandoned dog suffering from the heat exhaustion while she took a break from filming in Santa Fe, NM. This is a video http://tinyurl.com/qecjnfh of a local news report (Sorry don’t know how long it will exist.) Rachel has also played Rachel Posner in House of Cards.