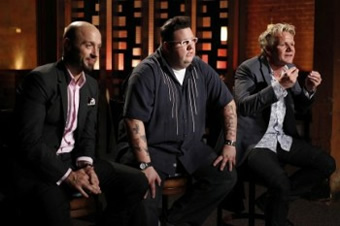 Last night, Gordon Ramsay debuted in yet another culinary reality series. Will FOX’s MasterChef be as successful as Kitchen Nightmares and Hell’s Kitchen or will it be quickly cancelled?

MasterChef is a competition that pits a group of talented home cooks against one another in a series of challenges and elimination rounds. They are judged by Chef Ramsay, restaurateur and wine maker Joe Bastianich, and Graham Elliot, the country’s youngest four-star chef. The winner of the contest walks away with $250,000 and a deal to author a cookbook.

The new series debuted last night with a 2.78 rating in the 18-49 demographic and 5.747 million viewers (per the overnights). That put the show in first place in the all-important demo and number four in overall viewers. Viewership grew slightly halfway through the episode, an indication that people liked what they saw and will probably return next week.

It looks like FOX might have a new successful summer series on their hands. If these numbers hold up, it seems likely that we’ll see another season next summer. If FOX tries to move the show into the regular season, it’ll certainly have a harder time but could still potentially do well.

But, what do you think? Is MasterChef worth watching or would you rather see it cancelled? Is it better or worse than the other Chef Ramsay shows?

Please renue all of them.