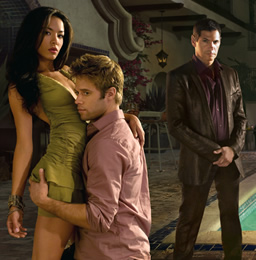 After months of network hype and mediocre anticipation, the new Melrose Place debuted last night. Like last season’s 90210 update, a couple original castmembers came along for the ride. Does this new version have a chance of sticking around as long as the original?

The first Melrose Place began as a FOX spin-off of the successful Beverly Hills, 90210 series in 1992. It revolves around a group of apartment complex residents played by Thomas Calabro, Josie Bissett, Andrew Shue), Courtney Thorne-Smith, Grant Show, Doug Savant, Vanessa A. Williams, and Amy Locane. The show wasn’t an immediate success and didn’t start to really gain steam until Heather Locklear joined the regular cast as ambitious Amanda Woodward in season two. The campy drama went through a lot of cast changes over the years and finally ended after seven seasons in 1999.

Though the CW network hasn’t had much success with their new 90210, the execs decided to try reviving Melrose Place as well. It takes place in the same apartment complex and features a whole new cast of young and sexy characters, played by Katie Cassidy, Colin Egglesfield, Stephanie Jacobsen, Jessica Lucas, Michael Rady, Shaun Sipos, and Ashlee Simpson-Wentz. To try to attract some original series fans, the producers included Calabro and Laura Leighton and even killed one of them off in the pilot.

For whatever reason though, the new version of Melrose hasn’t inspired the buzz that 90210 did and far fewer people were lured into taking a peek.

Last night’s Melrose premiere attracted just 2.27million viewers and a 1.3/4 rating/share of the 18-49 demographic. That put the debut in fourth place in its timeslot, well behind NBC’s America’s Got Talent, CBS’s Big Brother, and ABC’s weak Shaq Vs series.

That’s hardly a good start for CW’s Melrose and it’s very likely that future week’s numbers will be even worse, especially once the other networks start debuting their new Fall programming.

Did you tune in? If so, will you come back next week to learn more clues about the big murder? Based on these numbers you have to wonder if the new Melrose will be around long enough for the crime to be solved.

What do you think? Cancel it or keep it?

I saw the second episode and I’m already tired of the Jonah/Riley drama!

CANCEL THIS SHOW AND PUT PRIVILGED ON IN IT’S PLACE, PLEASE!!!!! PEOPLE WANT NEW STUFF, NOT SHOWS THEY’VE ALREADY WATCHED IN THE 90’S!!! HEATHER LOCKLEAR – GET A LIFE AND A NEW , FRESH SHOW!!!
PRIVILGED WOULD GET WAY BETTER RATINGS IN THAT TIME SLOT!

Dump it…too blase…too typical of the angst between these characters. I mean you have the woman who is killed in the beginning…who done it? You have the guy who has been living with his woman and now wants to get married and she is not sure YET? Then you have the student who needs money so she pimps herself out…
Y-A-W-N…need we go on…get me a pillow and my teddy bear and just let me sleep during this show.

I loved the MP. Even though it’s the first episode I can tell things will only go uphill. Perhaps proper marketing didn’t happen. I didn’t realize it was premiering this week until the last minute. Also, who is the network trying to attract for this show? teens who can relate better to 90210 and (God help us) Gossip Girl? or a more adult crowd that the original series aimed towards. Playing Britney Spears’ Circus in the trailer probably wasn’t the best move. However I was on the edge of my seat for 60 minutes and smiled like a little school… Read more »

Cancel it. I was not impressed with the barely-out-of-college crowd now inhabiting the familiar apartment complex. I watched the original show and it had fairly decent plot and pretty good character definition. This one, it feels like they’re trying to do to much with too little. Too many characters, too little character development. The only reason I’ll watch next week is if nothing else is on my Tivo.

Agreed. The CW is confused about the shows they present us. It seemed like the WB had better direction overall. Their former gem, Smallville, suffers from the same muddy trend that the rest of their shows do … they promise fireworks and give us firecrackers. I tuned in to Melrose Place since I watched the original. It instantly put us into the flash and noise and except for the interaction between Jonah and Riley, there was barely any story beyond the superficial. Maybe the other poster is correct … without Darren Star and/or Aaron Spelling, does this show have any… Read more »

CW is stuggling to find it’s veiwership. If I recall correctly their target is for younger adults/older teenagers. I was glad that they have taken these shows and tried to make them related to the older ones, yet have made them their own and tried new stuff. I hope that they do like they did with 90210, and ride it out as long as possible. Give it a chance. The show needs it and so does the network.

it had no point, its all about sex and no story

Cancel this crap and bring Reaper back!!!!

It is not the same. Why revive a show without Aaron Spelling or Darren Star (the originator of Melrose place.) In addition what adult wants to watch kids playing drama when kids don’t have any drama. Last time I checked Melrose place was about 30 year olds not 16 year olds.

Doesn’t matter, if they cancel this they will just find some other steaming pile of crap from the 80’s or 90’s to remake. My bet is on a Party of 5 remake where instead of a car accident the parents died on 9/11 or in a Suicide bombing while on vacation overseas. 🙂