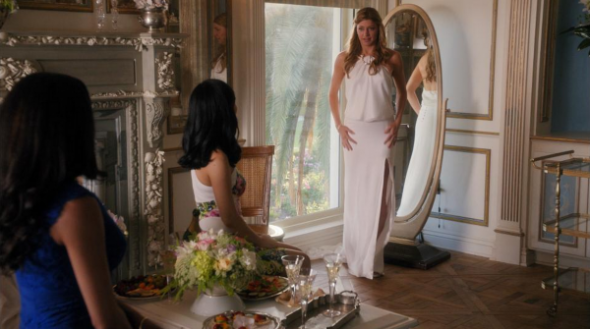 Last night’s second season finale of Mistresses left fans with a whole lot of cliffhangers but, will they ever be resolved? Will the ABC summer drama be renewed for a third season or, will it be cancelled instead?

Based on a British series of the same name, Mistresses revolves around the lives and loves of four female friends whose lives are complicated by their personal and romantic relationships. Performers include Alyssa Milano, Rochelle Aytes, Yunjin Kim, Jes Macallan, Jason George, and Brett Tucker.

Last summer, ABC made a surprising move when they renewed this new low-rated drama. While the series wasn’t a success with a broad audience, it did have a small group of very devoted fans.

If the network execs were hoping that the numbers would grow this season, they’ve likely been disappointed. Season two is down by 15% in the 18-49 demographic and about 3% in total viewership. Will these numbers be good enough to see the show renewed? We’ll have to wait and see. Word is that a decision will be made within the next month.

If Mistresses is cancelled, executive producer K.J. Steinberg says, “If we have the misfortune of not getting [renewed], we still feel that we’ve told some great stories this season and ended the series on some great, great questions… Ultimately, these women’s lives go on — and the complications keep tracing back to every action they’ve taken since the pilot. That feeling and that train keep moving. If it ends here, it would be very, very sad for us. But if I had known that it would end here, I don’t think I would have ended it any other way.”

What do you think? Do you still like the Mistresses TV show? Should it be renewed for a third season or should it be cancelled this time? Should the season have ended with so many cliffhangers?

Please do not cancel Mistresess!!! Love this show!!!
Thank you!!

I really hope there is a third season.

I hope this show doesn’t get cancelled. It’s one of my must-see’s of the summer season. The characters are all fun and exciting each week and bring alot to the table.

Do not cancel this show. I love it. Look forward to it on Monday nite.
Bring it back in the fall also. All the characters are great.
It is a great show.

PLEASE don’t cancel Mistresses…It’s my FAVORITE show and I REALLY wish it would continue NOW! And, I don’t even meet the demographic for liking such a tawdry, wonderful soap opera…♥

Renew this show!! It’s hot to watch monday nites!! + it’s my absolute fav show to watch in the summer!! 🙂

Please do not cancel this show. I look forward to it every week and have it set up to record on my DVR. I love the characters and story lines. I am really going to be super angry if it’s not renewed!!!!!!!!!!!!!!!!!!!! In fact, think I’ll stop watching ABC if they cancel it.

Please don’t cancel……this is one of my favorite summer shows! Always look forward to Monday night! Joss is too funny!

I absoblutly love this show they must bring it back maybe it should be on in the fall line up people are so busy in the summer just dont cancel it.

Please, please, please don’t cancel mistresses. It’s a great show. I look forward to watching it every Monday. The stars on the show are great. The story lines are great. So please keep it on tv. Love, love, love it.

i just found out about the show started watching it because there was nothing else on regular tv i dont have cable and can only get a few channels ,the show is very good some things are a bit too out there n unbelievable but all and all i cant wait to see the next one sorta like Dynasty and Dalllas was back in the day,my point is its worth renewing and that most people like me probly dont even know the show exist

Don’t you dare cancel this show. I look forward to Mondays to see this show. Please, please, renew. Don’t cancel its a great show