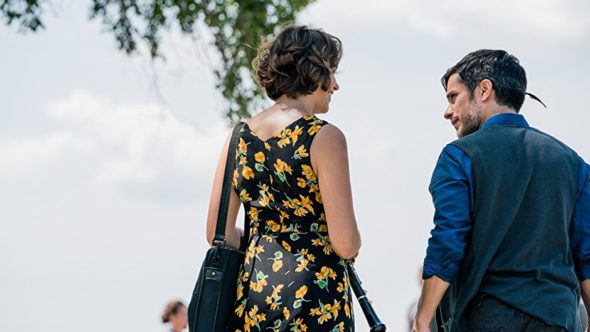 Will the music play on? Is the Mozart in the Jungle TV show cancelled or renewed for a fifth season on Amazon? The television vulture is watching all the latest TV cancellation and renewal news, so this page is the place to track the status of Mozart in the Jungle, season five. Bookmark it, or subscribe for the latest updates. Remember, the television vulture is watching your shows. Are you?

Unless they decide to publicize viewership, it is hard to predict whether Amazon will cancel or renew Mozart in the Jungle for a fifth season. For now, I’ll keep an eye on this series and update this page with breaking developments. Subscribe for free Mozart in the Jungle cancellation or renewal alerts.

4/7/2018 update: There will be no season five of Mozart in the Jungle. Amazon has cancelled this TV series. Now, I must fly. I have dinner plans. Details here.

What do you think? Did you think Amazon would cancel its Mozart in the Jungle TV series? If it were up to you, would they have cancelled or renewed this TV show for season five?

Rookie mistake on the part of the new CEO or whatever she is. It was an incredibly excellent show. Brought culture to people who may otherwise have none.

I can’t believe this show was axed! It is the best show I have ever watched and such interesting storylines, fabulous actors and all round brilliant entertainment. So much of the story yet to tell. Please bring this show back – it is so much better than anything else available .

So disappointed to learn that there will not be a fifth season for Mozart in the Jungle. It was just recommended to me and I’ve loved it. Each season was better than the last. Please bring it back!

I just became a fan of Mozart in the Jungle. I just bought a fire stick to watch prime shows and this show is one of the BEST on TV! I am up to season 4 and extremely disappointed and mad there is no season 5! I turned my family and friends onto the show and they love the comedy-drama of the series. We are disgusted with killing and political crap in our lives. We need more shows with love, romance, comedy, Music! BRING BACK MOZART FOR MORE SEASONS!

Omg. I have been watching this series, now in Season 2 and loving it. I cannot believe Amazon cancelled this show. What a pity. It is brilliant

What kind of scheisse is this? Mozart would say…I cannot believe it’s canceled! I find it to be highly entertaining, characters were great, music fantastic, behind the scenes very amusing. I actually blew through a few episodes a day it was such fun.
Then I find this out? Why?
Please don’t deny us more fun…
Bring MOZART back!

I really enjoyed Mozart, am sad that it has been cancelled. It was the sole reason I subscribed to Amazon, now I am cancelling them.

Bummer! Should not cancel this one…

This is the best show ever. It should not be canceled.

It is a sad day that Mozart in the jungle has been cancelled. I pray for a miracle it will return.

The show must be renewed. It is wonderful. I cannot think of a more intelligent, exciting show. Please renew this series.

PLEASE CONTINE “MOZART IN THE jUNGLE” FOR SEASON 5 . i LOVE THIS SHOW!

I love ‘Mozart in the Jungle!’ We need more shoes about the arts on TV. Amazon has done a awesome job with the series. Please continue to produce this wonderful show!

It is the best show ever. It must not be canceled.

How can they cancel this wonderful show? The acting is fantastic and I never appreciated classical music until I started watching. We need to have closure with the relationship of HaiLai and Rodrigo. I hope Amazon comes to their senses and renews this great show for Season Five.

I cannot believe that Amazon would be so short sighted as to cancel MITJ. It is delightful, funny, wonderful music, love, intrigue, jealousy, revenge, not to mention Mozart himself. And what iof Hailey and Rodrigo and the magic they make? What direction will Rodrigo go? Please Amazon, just one more season. I feel happy when I finish an episode. What else can make us smile today? It is a respite from an ugly world

I was new to series this year, but when I found out about it, I couldn’t stop watching it. I can’t believe Amazon is not renewing it for Season 5. Noooooooo!

We should cancel our Amazon subscriptions.