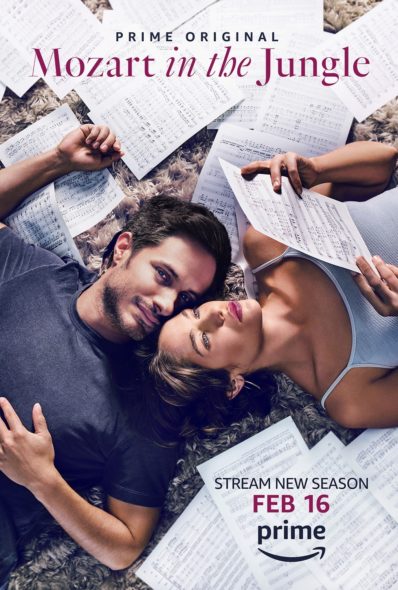 Does the fourth season of the Mozart in the Jungle TV show on Amazon hit all the right notes? As we all know, the Nielsen ratings typically play a big role in determining whether TV shows are cancelled or renewed. Amazon and other streaming platforms, however, collect their own data. If you’ve been watching this TV series, we’d love to know how you feel about the Mozart in the Jungle season four episodes. We invite you to rate them for us here.

I am so sad about the cancellation of Mozart in the Jungle. I only discovered it in May 2018. I have watched it all twice. I have never seen a show that gave me such a high.. I am delighted by this show. It is like seeing the best of a Broadway musical!!
Please bring it back..

Does this site pass these comments on to Amazon!!! Let’s make a noise together! “Amazon, you’re too good to be like the big box other guys like Netflix. Yes, Mozart in the Jungle was the best of the best… Bring it back and you will shine too!

This show has it all!! Great story line, well-developed characters you really care about, excellent acting performances, fascinating knowledge about composers, classical music and the 2 countries in which they perform! ..the film settings make you feel as if you’re on tour with the symphony. And most of all, it gives us all a window on the lives of these hard-working professional musicians and what it takes to bring us the most beautiful music in the world ; their years of practice, their passion for music and the sacrifices they make. Season 5,6,7,8 & more… please! (At least season 5…I… Read more »