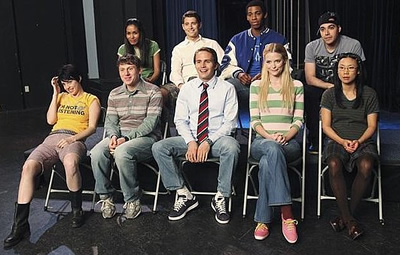 Despite a lot of promotion, My Generation stumbled out of the gate and now ABC has cancelled it after two episodes. If you were watching the ratings, this doesn’t come as a surprise.

My Generation revolves around a diverse group of young adults who attended high school together. While there, they were interviewed for a documentary. They reunite 10 years later and we see how their lives and expectations have changed. The ensemble cast includes Anne Son, Daniella Alonso, Jaime King, Julian Morris, Keir O’Donnell, Kelli Garner, Mehcad Brooks, Michael Stahl-David, and Sebastian Sozzi.

In its first week on the air, My Generation attracted poor ratings with a 1.6 in the 18-49 demographic and 5.2 million total viewers. That was bad enough to land it in fourth place for both categories.

For week two, the numbers were much worse. The show attracted a terrible 1.1 rating in the prized demo and just 3.815 million viewers. For the timeslot, it landed in fourth place in total viewers and in fifth place for the demo, behind even The CW. That’s an amazingly bad performance for a major network.

ABC has now cancelled My Generation and they’re pulling the show from the schedule immediately. Production on the series has been shut down. It’s unknown how many episodes have been completed but it doesn’t seem likely that the network will bother releasing the unaired ones.

A timeslot replacement for the cancelled series is expected to be announced on Monday.

What do you think? Should My Generation have been cancelled? What about the series didn’t work? Could it have been fixed?

I saw the promo for the show in the movie theaters one day and I thought to myself I deffinatley have to watch this show, I cant wait! and I did not get to watch the premiere becuase I had no idea when it was going to be on, so I pulled up Hulu and caught up on the 2 episodes, I thought to my self wow 2 episodes that all I missed? So when I saw a third episode had not been posted —-I was so upset!!— Really it was pulled that fast?! Stupid ABC!

OM Goodness, i just found out that it got cancelled. I was wondering why it hasn’t been coming on any more. I actually really liked the show. BRING IT BACK!! BRING IT BACK! BRING IT BACK!! Pretty please. I was looking forward to seeing it, but aww man.

I was really upset that ABC got rid of the show so quickly. I really wanted to see what would happen every week and then bam its gone. Please ABC bring it back..I feel so lost without it..

How are you seriously going to cancel a show after two episodes? If you are looking for a show to replace “Lost” you are not going to get that if you air it for two weeks. What a joke ABC. Add to the fact that you are airing it at 8 PM when families are just sitting down to enjoy the rest of the night and I bet there was a ton of people who DVR’d the show which the viewing numbers do not take into account. This was turning into a very interesting show with a bunch of different… Read more »

ABC did a bad thing of cancelling the show after 2 episodes……give it time for at least 4-7 shows. …….I still wish LOST was on……I guess ABC wish too..

The show was amazing and actually different, not like the other shows, please bring it back ABC this is unfair, how will I ever know what will happen now!

I was looking forward to this show for months and when it finally aired I loved it!! On the third week I sat down to watch it and it wasn’t on. I was very disappointed. I feel that they should at least release the story line so that we can know what happened!!!

Stupid Networks! What happened to letting shows have time to generate viewers over time? So many new shows came out all at once that it takes time to figure out what to watch. Disappointed as I would have liked to seen where this would have gone. A few characters though I thought weren’t played by the right person but I still liked it. Sad what has happened to the industry as they demand high ratings out of the gate….crazy! IT TAKES TIME NETWORKS!!!!!!

I absolutely fell in love with this show and then all the sudden it was gone! For the past two weeks I had been waiting for it to come back on, i had no idea this show got canceled. I’m very disappointed that the ABC network only gave it two weeks….I wish they would reconsider.

Amazing that they put a new show in the toughest time slot in the week and expect it to get big numbers. I am that generation and I have kids that have to be in bed by 7 and then I have to follow shortly thereafter to get them up and off to school. I was really looking forward to the show and can’t help but to think that it is more of a 7-8 time slot.

I really liked the show. If they don’t have a replacement show then they should show the other episodes. I like Grey’s, but I don’t care to watch the previous episode. Two episodes is not enough time to decide if a show should be canceled.

idiots….the show was thoughtful, poignant and intelligent….a rarity on tv today
Can you give it another chance, PLEASE!!!!!

It was a good show. I was rather dissappointed when i realized that it had been canceled. I really wish they would air atleast one more episode as a sense of closure to the series instead of leaving us hanging like this.

I told all my friends to watch the show and then all of a sudden, it’s gone! At first, I thought that there was something wrong with my DVR. I really enjoyed the show. Please bring it back. The only bad thing is that now I know that it is NOT a documentary film. Well, I thought those folks on the show were too good-looking for regular people.

I seriously did &thought the same thing!!!! bring it back ABC!!!