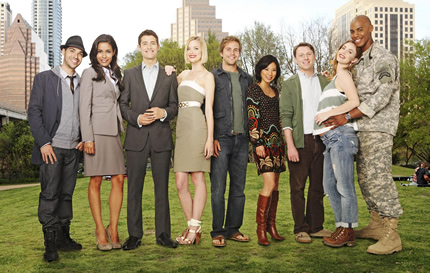 TV show description:
This dramatic series follows a group of former students of Greenbelt High School in Austin, Texas to see where they ended up.

In 2000, a documentary film crew followed a disparate group of high schoolers as they prepared for graduation. These students couldn’t wait to head out into the real world. But the world they entered got very real, very fast.

Now, 10 years later, the classmates are returning home. They discover that, even if you don’t get exactly what you thought you wanted out of life, it’s not too late to get what you need.

Labeled as “the rich kid” in the documentary, Anders Holt (Julian Morris) had a dream of becoming an architect and of marrying his high school sweetheart, Brenda. Still handsome and charming, he now works in the sales department of his father’s real estate firm and is on the fast-track to becoming partner. He ended up marrying fellow classmate Jackie. It’s a surprise to some considering they were so different years ago.

Jackie Vachs (Jaime King) was “the beauty queen” in high school. A very popular cheerleader, she dated a college student named Trent and wanted to be an actress. A decade later, Jackie is married to Anders and she’s given up her dream of becoming a professional performer. Jackie’s trying to find her place in the world and volunteers at the local hospital.

Brenda Serrano (Daniella Alonso) was “the brain” and came from a nice middle-class family. Being popular was never very important to her and she was happiest working in the science lab. One of the school’s top students, Brenda dated Anders throughout high school and, because he was named Prom King, she ended up getting Prom Queen. Though everyone thought they’d end up married, they broke up before college. Brenda is now living in Washington, DC and working with a Congressman on a banking regulation bill. She believes in helping people through her important work but misses her family back in Austin.

Anders’ best friend since childhood is Rolly Marks (Mechad Brooks). Known as “the jock,” Rolly was an all-star athlete and was scouted by college basketball teams as early as his sophomore year. A strong patriot, Rolly is now a Sergeant for the Army and is deployed in Afghanistan. Though he’s proud of his commitment and what he’s fighting for, he’s looking forward to returning home to his pregnant wife, Dawn.

Dawn Barbuso (Kelli Garner) was “the punk” in school. She lived with her mother and much younger brother and hated any kind of authority. She worked part-time at an ice cream shop with The Falcon and the two frequently got into trouble together, holding the record for the most detentions. Now, pregnant and longing for Rolly to come home, she was evicted when she lost her job. Dawn is living with her best friend from high school, Kenneth, and taking advice from her friend Caroline who had a baby of her own years ago.

Known only as “The Falcon” (Sebastian Sozzi), this student was labeled “the rock star” and believed in living up to the title. With an ever-present smile and charismatic swagger, he loves music and attention. He was one of the few people to be able to move through the various school cliques with ease. Living in New York, he’s now working hard at living his dream — DJ’ing, producing, meeting, and recording. It’s harder than he thought it could be and doesn’t have room in his life for much else.

Seen as “the nerd,” Kenneth Finley (Keir O’Donnell) didn’t enjoy high school at all. He did okay academically but didn’t connect with many people and was sometimes bullied. He briefly dated his best friend, Dawn, but it didn’t work out. Today, he’s a home body and a fourth grade teacher. He makes a point to teach his students about respecting each other.

Caroline Chung (Anne Son) was “the wallflower” at Greenbelt High. She was very shy, often nervous, had no fashion sense, and was a little boy crazy. Despite having very strict parents, she ended up getting pregnant on prom night and having a baby boy. Today, Caroline has control over busy life. She runs a hotel that she took over from her parents and renovated. She lives there with the light of her life, her son Tom (), who’s in Kenneth’s fourth grade class.

“The overachiever,” Steven Foster (Michael Stahl-David) put all of his time into studying and being the best he could be. He was highly driven, spent every waking moment with his nose is a textbook, and was the class valedictorian. He took summer classes, had an internship at a computer company at 15, and was offered scholarships to six colleges. After high school, he dropped out of Brown and moved to Hawaii. Steven’s now a bartender and an avid surfer who’s life takes a radical turn when he finds out that he fathered a child back in school.