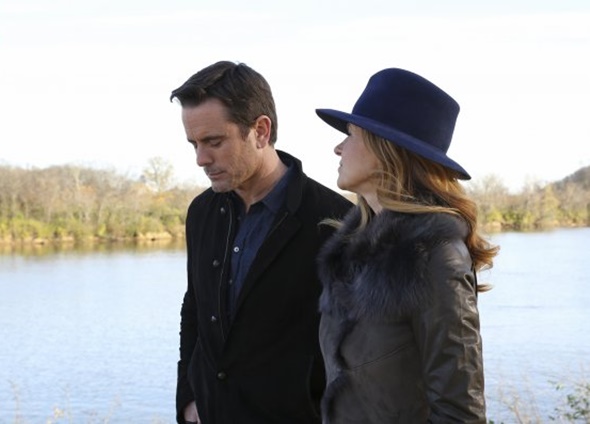 Nashville returned to ABC on Wednesday night with the biggest moment on the series since it began – the wedding of Rayna and Deacon. Does this pair tying the knot mean the series is coming to an end?

ABC did not include Nashville when it renewed a large batch of its series earlier this month, and one of the stars of the series is not even sure about the future of the series.

Connie Britton is the actress behind Rayna James on the country primetime soap, and she is also an executive producer on the series.

She spoke about the series in an interview with The Hollywood Reporter, and she made it clear that she has no idea if the series would return for a fifth season. This is different than a report late last year that almost guaranteed a renewal for the series for next season.

Britton said the following about ABC’s renewing the series:

“I don’t know. It’s always so hard to know what’s going to be the future. Those things are so completely out of our hands, so I always just wait to hear.”

When answering another question, she stopped herself from saying that the series was nearing its end with the wedding of Rayna and Deacon. She actually vetoed the idea of the pair getting married at the end of last season. She did not want the hospital bedside wedding.

Are you a fan of Nashville? Do you want a fifth season? Tell us what you think.

Nashville has so many fans here in Australia. A fantastic show with sensational music, cast and storylines. Long live Nashville!

I enjoy Nashville each week. When it is not on I usually find an old episode on demand and watch it….PLEASE RENEW for all of us who enjoy the show.

Please renew Nashville for a 5th season it is the best show on television and my favorite TV show Ever!

Please, please renew this great show. I live in Nashville now but loved it before I moved here. There isn’t another show on TV with with such a great story line and truly wonderful music. Renew Please !!!

My husband and I binge watched the first 4 seasons. It took a few weeks of Netflix. We are hooked. Amazing music, interesting characters and stories and so much talent. Please keep going. This is true entertainment that lifts the spirit and takes us on many journies.

Please give us a season 5!! This is such a great show and the only one like it. Love the actors and the music and the story line is great. Plus there’s so much more to be told of the characters in the story. Please do not cancel this show.

This is one of my favorite shows. Please don’t cancel. The characters are good, songs are great and the singing great also. A 5th Season Please….

I want a 5th season. Luv the show and music!

This is my favorite show, bar none! There is nothing else like it with the terrific music, great actors, and the interesting storylines. Now that Glee has gone, there is no other music show. I don’t like hiphop or rap so Empire doesn’t draw me in. Keep Nashville going!

Please give us another season!! This is SUCH a good show!!

Please don’t cancel this show ABC!! It’s such a great nighttime soap/ drama that brings amazing and brilliant new music!! The actors are phenomenal, and just about everyone can sing beautifully!! You don’t get that in many shows these days!! My family and friends certainly look forward to watching every single week! Please, please, please, do not let another great show come to an end!!!

It will be a surprise if the show gets another year because it does not seem to have the support from the network like previous years.

One thing that might tip the scales about a fifth year is the show would reach 100 episodes, which makes it more attractive for syndication.

Yes I want Nasville to continue, we Love the show, it’s characters, location, music. Don’t think the networks realize there are a lot of people who don’t like to watch violence, cartoon characters, comic books, or just don’t care.

As a country music fan I just have to say that i LOVE this show. The unknowns are great and the fact that they always have guest appearances of real country music stars is awesome! The story lines are great and I can think of a lot more shows that could go off the air than this one! Again, I think the networks take the demographic of the younger crowd too seriously and they dont take into account enough of the over 50 demographic. We are the one’s really watching this stuff!