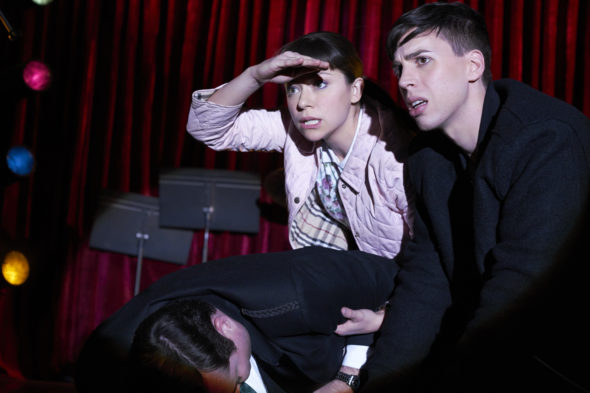 Will Rachel wipe out the other Leda clones? Has the Orphan Black TV show been cancelled or renewed for a sixth season on BBC America? The television vulture is watching all the latest cancellation and renewal news, so this page is the place to track the status of Orphan Black season six. Bookmark it, or subscribe for the latest updates. Remember, the television vulture is watching your shows. Are you?

Airing on the BBC America cable channel, Orphan Black stars Tatiana Maslany as Sarah Manning and the Leda clones. The cast also includes cast also includes Jordan Gavaris, Maria Doyle Kennedy, Kristian Bruun, Kevin Hanchard, Evelyne Brochu, and Ari Millen. In the fifth and final season, expect a showdown with Rachel (Maslany), who has been out to destroy Sarah and her sestras from the start. With so many lives on the line, Sarah must plot her moves carefully.

The fifth season of Orphan Black averaged a 0.08 rating in the 18-49 demographic and 274,000 viewers. Compared to season four, that’s down by 20% and up by 7%, respectively. Find out how Orphan Black stacks up against other BBC America TV shows.

Since we’ve known for a year that Orphan Black is ending after five seasons, there’s nothing more for me to do — except prepare for my feast. That said, I’ll keep an eye out for any items about spin-offs or sequel series. Subscribe for free updates on any Orphan Black TV series news.

What do you think? Are you sad that the Orphan Black TV show ended with season five? Should it have been renewed for a sixth season?

I just found it on demand and watching one episode after another. I’m sorry to hear it’s been cancelled. I was looking forward to more.

The show wasn’t cancelled. The plan was always for 5 seasons.

There have to be a season 6. Orphan black is the best show I’ve watched in a long long time. The writer is good and am sure there can be a season 6,7 And 8. Best show ever.

This was one of my all time favorite shows. All characters were brilliantly cast. Please do NOT do a 6th season though. If you’re going to drag the story on, it’ll lose its appeal. Like with Breaking Bad, all good things need to come to an end. I hate it when good shows get screwed up when they start milking it once the story’s done. It was good, everybody thoroughly enjoyed it, now it’s time for something else (and preferably as good as this).

WHY????? EVERYTIME i find a new show that i LOVE (&binge watched all 5 seasons in a matter of a week) its gotta be cancelled???? It is such a good show!!!! It needs a proper ending if your gonna end it…this wasnt the right ending for it.please be a season 6 at least!!!!

This is a great show .. Addictive
Love,love all the characters. Amazing acting
Please do season 6

I AM BEGİNG YOU! Please do it six season we need that. This is my favorite tv show. and please get serious >3

We want a season six please, i love this serie

It is one of the best tv show. So yes it should be renewed for a season six.

I’m very sad that Orphan Black has ended this season. I wanted more . Like adventures as them as a family and etc.. Please give us more.

Damn the ending of season 5 has got to be continued, they just got back Kira, Rachel took out her fake eye. Now where will Sarah and Kira go? What will Rachel do? Will Brightborn still be continueing their psycho experiments? They still have the patents….. Season 6 should definitely come!

I’m so upset that there will be no more Orphan Black, such a great program. Please bring it back