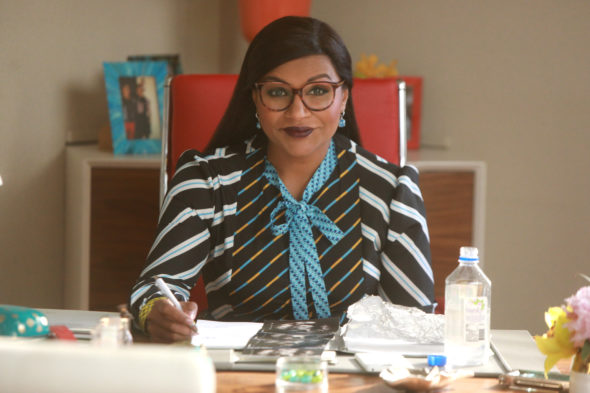 Is there a doctor in the house? Has The Mindy Project TV show been cancelled or renewed for a seventh season on Hulu? The television vulture is watching all the latest TV cancellation and renewal news, so this page is the place to track the status of The Mindy Project, season seven. Bookmark it, or subscribe for the latest updates. Remember, the television vulture is watching your shows. Are you?

Streaming on the Hulu paid subscription platform, The Mindy Project stars Mindy Kaling, Beth Grant, Bryan Greenberg, Ed Weeks, Fortune Feimster, Ike Barinholtz, Xosha Roquemore, Rebecca Rittenhouse, Garret Dillahunt, and Chris Messina. OB/GYN Dr. Mindy Lahiri (Kaling) was used to being unlucky in love. Now, on the heels of her season five wedding to Ben (Greenberg), the sixth season follows her, as she figures out what comes after “I do.” All the action at Shulman and Associates makes it challenging for Mindy to settle into married life. Meanwhile, Jeremy (Weeks) and Anna (Rittenhouse) get used to their new relationship, while Tamra (Roquemore) becomes Lahiri Fertility’s newest patient.

Well, you don’t have to spend the season worrying whether The Mindy Project will be cancelled or renewed for season seven. When Hulu last renewed this TV show back in March, they announced the renewal was for a sixth and final installment. Still, I never take my eyes off TV series, until it is truly done, so I’ll keep any eye out for any breaking developments. Subscribe for free updates on any cancellation or renewal news regarding The Mindy Project.

What do you think? Should Hulu have cancelled or renewed The Mindy Project TV series for a seventh season? Is it ending at the right time, or would you have watched more?