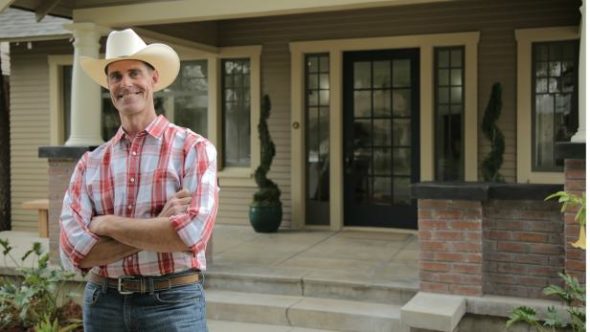 It’s preservationist Brett Waterman to the rescue. DIY has announced that their Restored TV show has been renewed for a (short) third season of six episodes. In the series, Waterman works to rediscover the beauty of old homes that have seen better days.

“It’s my job to return a home to the way it was intended to be,” said Waterman. “The character of these old homes just needs to be rediscovered. An older home is not supposed to look brand new but should look beautifully maintained.”

New York [April 6, 2018] DIY Network has ordered six additional episodes of Restored starring preservationist Brett Waterman. The series features Brett as he reveals the unrealized potential hidden beneath neglect, bad renovations and unsightly additions. It has attracted more than 4.1 million viewers to date, with live plus same day ratings up 6 percent among P25-54 versus the premiere season. To date Restored has grown the Wednesday 9 p.m. ET/PT timeslot P25-54 rating by 42 percent year-over-year.

What do you think? Do you like this DIY TV series? Do you plan to watch season three of the Restored series?

Restored is a great DIY program. I sure hope comes back for another season!

I have watched since I got Direct TV and enjoy it thoroughly. I think it should be on every week. That means 52 of them . Brett has a great personality and presents himself well.

Absolutely the best show on DIY. When DIY and HGTV is full of crap shows with hosts who have little or no talent or expertise Restored is a breath of fresh air. Bret is a true craftsman with a passion for the homes he restores.

I just discovered this show and love it. Please keep them coming!

This is the only show that I watch faithfully on DIY Network! Yes, more, please?

Please bring this show back…. Best show on HGTV.

Love this show.I have a house that dates back to George a Washington watering his horses at the spring out back and possibly stayed here.Im a nurse and had to retire early end of 2019 due to bad lungs and heart.My husband has rheumatoid arthritis bad and unable to do restoration.PLease help

I love his show he is great at what he does it’s my favorite show. I love craftsman style houses. He’s the best at what he does. I’m buying a house soon and would love for him to restore my house. Love you Bret waterman ♥️

Brett Waterman is one of my favorite home DIY people!! Love his show!!!

Love this program and his attention to the past by focusing on ‘the way it was’. He loves what he does and I enjoy his enthusiasm and loyalty to his idea.

Please bring RESTORED back. Brett Waterman is the best. BIG TEXAS FLIP I hoped will be renewed. And BEST HOISE ON THE BLOCK is also a wonderful show.

Love this show , he does not mess up the old houses .

We think this show is one of the very best that we have seen in a long time. We watch every episode if we can. Brett is very passionate about what he does, and it is nice to see the quality of work that he puts into his restorations. We hope that this show is extended for more than a short season. Keep it on air as long as Brett has those beautiful homes to restore.

Please continue with Restored! Love the show, and the houses he works on. Also, love Brett Waterman. He truly loves what he does! Best “home show” around.

PLEASE keep this show on!!! It is my absolute favorite home improvement show!
I appreciate that he wants to “restore” instead of changing the character of the house!
I love everything he does!!!!!
No one is allowed to talk while his show is on!
P.S. I also am smitten for Brett Waterman!

I agree with Billie, I have a 1919 Craftsman in La Verne CA and I wish I could have him do my house. I love the show keep it on. Thank you Karen