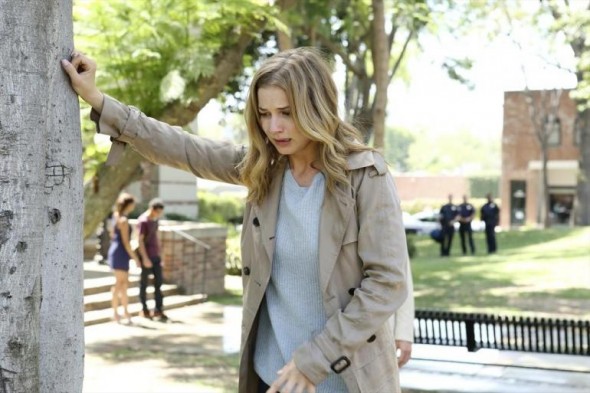 It looks like Amanda’s revenge plots are coming to an end. ABC as cancelled their Revenge TV show after four seasons.

On this season of Revenge, many things have changed but Emily Thorne (Emily VanCamp) and Victoria Grayson (Madeleine Stowe) still had plenty of reasons to hate each other. The rest of the show’s cast includes Gabriel Mann, Nick Wechsler, Josh Bowman, Christa B. Allen, James Tupper, and Karine Vanasse.

There had been speculation that Revenge would be ending this season, especially since a network promo teased viewers not to miss “the final four episodes.”

Once a decent draw for ABC on Sunday nights, the ratings have come way down. The current season is averaging a dismal 1.1 rating in the 18-49 demographic with 4.49 million viewers. That’s down by more than 23% year-to-year.

This leaves two more episodes for the cast and crew to wrap things up. The series finale — titled “Two Graves” — is set to air on May 10th. It brings the show full circle as Amanda is accused of a murder she didn’t commit — just as her father had been.

Hopefully the finale will give the fans a fitting conclusion.

What do you think? Are you sorry to hear that Revenge has been cancelled? Do you think it should have been renewed for a fifth season instead?

It has been on for 4 Seasons and even though I hate to see it go it finally run into the ground. I have watched this since the beginning but people move on with their lives. I do hope the Series Finale will go out with a bang with Emily and Jack finally becoming a couple.

I loved “Revenge” and really hated when it was cancelled. I think it should had at least 1 more season. That way Emily/Amanda and Jack could have at least 1 great year and then and the series on a better note such as: The time- their 1st wedding anniversary, Emily/Amanda is pregnant, and they live happily ever after.

It was raw awesome!!! I loved Emily, Nolan, Aiden, Jack and Daniel so much. They are phenomenal actors and actress. I kinda sensed that it was coming to an end since Daniel was killed. Now the matriarch dies!! How far will the story go with those important characters gone? It was good while it lasted…a good run. I would love to see Jack come back for Emily and marry her. That would be a fitting ending!!! Full circle don’t you think?

No! Revenge is my guilty pleasure…well, one of them! Any chance Emily & Jack will get married in the last ep???!!

This show has been great since day one they are out of possible things to happen I just want a good ending I’m waiting for this season on Netflix because I couldent watch it on cable in the beggining so I just let it go until I can watch it on Netflix so let’s wrap this up really good I want a great ending thank you for an amazing tv series.

Sorry to see it end. There are plenty of directions they could go in, but doubt that they will change their minds. Most of what I like gets cancelled-usually sooner rather than later. I am surprised that this lasted as long as it did-not because it wasn’t good-just because I liked it. I would rather see a show with a little meat in it, and things to think about, facts that are not wrapped up neatly- but that could make great plot twists, but I’m not sure that that is what most of the viewing public wants. Too bad

Grandma Pat, I’m with you. it seems like everything I watch gets cancelled. What’s a poor boy to do?

So relieved to hear this is the last season. I liked the characters, so I kept watching it long after the plot lines ceased to be plausible.

I hope they will keep revenge on TV and I like it a lot. It is almost like a soap opera

I think they should renew it. It is a great show and I think it has full potential, just think they should switch things up a bit but other than that renew it and if they are cancelling the show, they probably aren’t going to make an ending that’s always what ends up happening.

I quit in season 3

Sorry to see “Revenge” go, but it had nowhere to go anymore. I would like to
see all the characters on another show. Enjoyed the ride from day one.

Please marry Emily and Jack for a happy ending.

I agree,the show is great but the’s only so much plotting one girl can do.I hope there is a happy ending and not like “LOST”(big loer).

I hope it will be ending that we all have been waiting for. I have watched since episode 1. I knew it had to end someday, but wasn’t expecting it to be so soon. I just hope we can get another good series as this one. ABCs Secrets and Lies, I hope comes back.

I never got into Revenge so I won’t miss it. I’d like to see ABC put Forever in its place.

I am a little disappointed because I’m a huge Emily Vancamp fan. But the show has come full circle. Where else can it go? I just hope Amanda and Jack can finally have their Happily-Ever-After, Fairy-Tale ending that we’ve all been waiting for since the beginning.

I’m actually shocked. I use to watch but it changed so much and was too fast paced that I got lost. Well at least they get to wrap their show up unlike Star Crossed.

I’m not surprised… they’ve basically run it where they could especially with blowing Victoria up etc. It’s had a good run though. I hope they give it a good end.