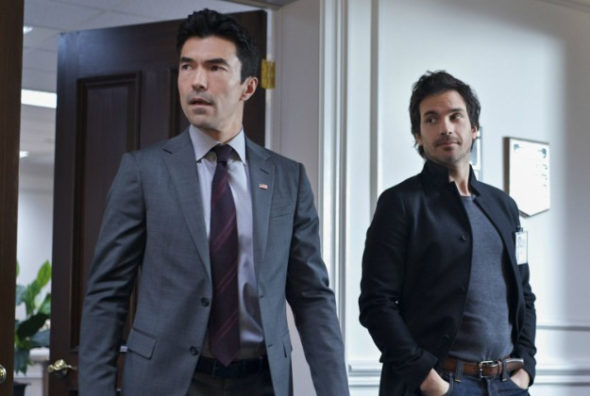 Will there be a second season of Salvation? Recently, star Ian Anthony Dale spoke with TVLine about the future of the CBS TV show.

Salvation finished its freshman season this week, but will there be another? Speaking to TVLine, Dale revealed there is a plan for a second season:

There is a plan, yeah. That’s the thing, there’s so much more story to tell. I’m hopeful that I’ll be buying winter clothes for my newborn son, which means we’d be headed back to Toronto in February and I get to see what [showrunners] Liz [Kruger] and Craig [Shapiro] have up their sleeves. The way we end it really leaves the door open for a lot more story to be told and I certainly would love to get back together with this group of people. This was a wonderful, harmonious experience — and I’m sure Jen has told you the same thing.”

Though CBS has not yet announced a renewal for Salvation, Dale says it would be “foolish” not to greenlight a second season:

There are definitely options. And when you’re able to bring the elements together — this cast, these writers, that crew in Toronto — it would be foolish not to recreate that magic at least one more time.”

What do you think? Did you watch Salvation? Would you watch another season?

WOW! great show. I just binge watched it over last nite and today. Found it on Netflix. I completely agree, for closure there needs to be a 2nd season, or a mini-series, or a couple of movies to take us the rest of the 100+ days to see if our big blue ball gets ‘Samson-oided’ … “Samson-ited” ?!?

Great series and actors are great with characters. Cant wait until Series 2 !!!!
I have never written anything for a TV series like this before but I think CBS have hit on a winning combination:) Thanks for the series so far!

A second season would be interesting if they follow up on many aspects that have been set in motion. Seems a shame to leave so much unanswered. Not surprised however as it seems to be the norm when dropping a show. Whether for or against, I think we’d all like to see they do with it as there is a great deal of potential no matter where the storyline goes.

It was fairly clean compared to all the junk on TV these days, plus the story line kept me riveted. It has to come back; there are too many unanswered questions. I’m still having withdrawals from it being off the air.

Two in my household are hooked and want more! We were sad that the series stopped when it did – hoping for more resolution to the plot. So we are DEFINITELY looking forward to season two and what the “future” brings for this great cast.

I looked forward to my Salvation “fix” each week. With all of the GARBAGE that is on TV today, it was refreshing to have a show with substance and a great plot line.
I am really hoping that it will be renewed!

There is nothing else like it. Might even say not from this world, the whole thing. Not a second sans suspense, wonderment and “See? you wouldn’t believe me” in insinuation of what is really going wrONg on the very planet (13²+14² E.G! check those intermediaries, svp) 99balloons/11tentacles, easy..

I really liked this show! Please renew it…