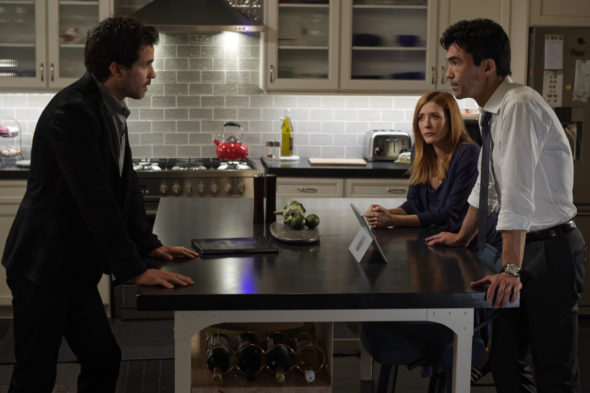 Salvation will end its first, and possibly last season, next week, and details for the finale have been released. The series has not yet been renewed for a second season, and ratings for the series have been low at .52 in the demo numbers and an average of 3.564 million viewers.

CBS revealed the full details about the Salvation finale, titled “The Plot Against America,” in a press release. Check that out below.

“Harris, Grace and Darius must topple the illegitimate government, and Darius makes final plans for the ark, on the season finale of SALVATION, Wednesday, Sept. 20 at a special time (10:00-11:00 PM, ET/PT) on the CBS Television Network.

Are you a fan of Salvation? Do you want a second season? Tell us what you think.

We “dvr” the show and my wife and I watch it every week. We enjoy the science fiction overtone of the show as well as the believable interaction between the players! Also plenty of action and some romantic overtones!

I really really liked the series – though at times towards the end , it became a bit dramatic and unbelievable ( the bit about the President coup etc)- but with some fresh twist to the storyline, season 2 should be fun. Particularly like the dynamics between Darius Tanz and Grace. Darius is total value for money !:)

I liked the series. There is plenty of potential here.

And that is from someone who thinks the Ark list should be all female with Sperm in storage to maximize the potential genetic diversity to repopulate and even create a truly equal society that has no patriarchal baggage.

yes can’t wait for the season 2

Love the show. I had no idea it would be cancelled. Have been waiting for the finale for weeks now.. Very disappointed. At least finish it with a final episode.

This is a superbly crafted and excellently acted series with profound pertinence to the current global situation. I urge continuation of this wonderful drama into a second season.

I loved this series. Even if there’s no season 2. We deserve closure. However, I want a season 2, even if it’s released online only. Forget the people who don’t like the series and give us closure

My husband and I loved the series. We were a little confused at the seasons finale as it left us hanging. Please continue the series so we can at least have some closure!

My wife and I enjoyed the season, but looked forward to the ending that apparently didn’t happen. We do not want another “Dome” where the plot gets dragged into a never-ending soap opera. Please finish Salvation with good last show this year.

I love the show! Please bring it back for season 2! It was different. A lot going on. It was nice to see something different, especially because nowadays a lot of the TV shows are about killing and nudity. No wonder society is going down without ‘salvation’ hehehe 😉

Great show. CBS needs to stick with it-give it a chance with a better lead in and better time slot!

It is refreshing to see new ideas and subject matter being produced. I like reality shows but way too many now. Cop shows are becoming repetive. Super hero’s and zombies are a joke. Salvation has ideas that are real possibilities and food for thought. Please renew salvation and let us see what our future might bring. Endless possibilities.

Salvation has been one of the better series we have seen for a long time in Zimbabwe, so YES we would definitely like to see a second series run