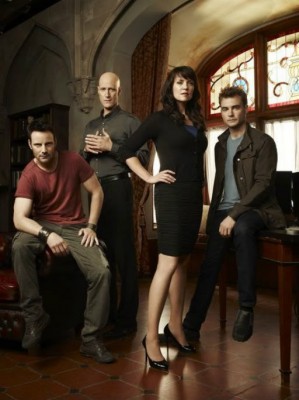 As most fans of Sanctuary likely know by now, the show has been cancelled by Syfy. The TV series ran for a total of 59 episodes over the course of four seasons.

Following the announcement, several people associated with the show commented on the news and were unanimous in their appreciation for the fans.

Craig Endler (senior VP and GM of Syfy): “Thank you to the amazing cast + crew for a great 4 seasons, and to our always awesome fans for their support!”

Mark Stern (Syfy president of original content): “We’re honored to have been part of this incredible series… It’s been an amazing ride and we look forward to our next project with Amanda Tapping, Martin Wood and Damian Kindler.”

Space (Canadian cable station): “Thank you to the cast and crew @SanctuarySeries for an amazing four seasons! We are so proud of this SPACE Original Series.”

Damian Kindler, Amanda Tapping and Martin Wood (executive producers): “We couldn’t be prouder of the four seasons we made on Sanctuary… We are very grateful for the opportunity and must acknowledge the wonderful work from our cast and crew, the support from our studio, the Beedie Group–who have been with us right from the start, the networks who worked so hard with us each week, and most of all the fans … we owe so much to the fans.”

Alan McCullough (writer): Thanks to all the cast and crew of #Sanctuary for 4 great years… And even bigger thanks to the fans!”

Damian Kindler (director/writer/executive producer): “Now that it’s official, thank you fans and viewers of @SanctuarySeries for the most incredible 4 years of my life. Solemn bow to you all.”

Amanda Tapping (Dr. Helen Magnus/executive producer): “To all the fans of @SanctuarySeries we love and adore you. Thank you for the love and support. Now to the long dark tea time of my soul. :(” She later followed that up with: “Wow! And wow! You guys are amazing. Your tweets are a great lift to my soul. Onward and upward!!! Xoxoxo”

Agam Darshi (Kate Freelander): “As many of you know Sanctuary has come to an end. Thank you for being loyal fans to the show, and for supporting me and my work. I am so very grateful to ALL of you. Big thanks to the Sanctuary team and to Syfy for embracing me and creating more of what TV needs: A strong kick ass female character. Let’s play s’more. xoxoxo”

Gillian Horvath (supervising producer): “Thanks for all the warm tweets! Two of the best years of my life. Did work to be proud of and made lifelong friends. #Sanctuary”

Ryan Robbins (Henry Foss): “Thank you for all the kind words & support. #Sanctuary was truly a life-changing experience for me. You were all very much a part of that.”

Robin Dunne (Dr. Will Zimmerman): “Thanks to our wonderful @SanctuarySeries fans for 4 years of love & support. You gave us a great life. See you on the next one. XO Will Z”

Chris Gauthier (Walter): “Goodbye and thank you @SanctuarySeries one of the best sets in Vancouver I’ve worked on! Thanks for having me! Truly a great experience! :(”

Pascale Hutton (Abby Corrigan): “Thank you to everyone for welcoming me into the @SanctuarySeries for the final two seasons. I will treasure the experience always.”

Robert Lawrenson (Declan Macrae): “Seriously touched by all the heartfelt messages from we’re getting. Said it before and will say it forever – Best Fans Ever! Thank you!!” He followed that up with: “A huge thank you to the phenomenal Sanctuary fans, cast, crew & producers for a wonderful run. Look back with pride and forward with spirit.”

What do you think about the cancellation? What would you say to the cast and crew of Sanctuary?

I could not agree more than with the following posters, cancel all the great shows and leave us with reality shows. Not one of them lives up to great sci-fi. Amanda and the rest of the cast and crew thanks for great times these last four seasons. Sanctuary is gonna be mine on dvd, but all of you will be missed. Sy-Fy you screwed up not bringing this show back!!!

Someone should tell Amanda Tapping et al that “Prouder” isn’t a word.
So much for educated actors.

Really? Technically prouder is an acceptable word, you just don’t hear or see it being used often. Amanda is well educated and well respected.

So much for educated posters.

I just started watching the show. I’m midway through season 2. It’s pretty good, but so far it seems like they have no problem killing off characters and/or not making the most of them. Like the Druid and Cabal revenge storyline… or lack of I should say. The Ashley mystery is also another one that bugs me. Either way still a pretty decent show. I’m definitely more depressed about the loss of Eureka. All I know is that once Syfy cancels Being Human, Alphas, and Warehouse 13 I’ll have no reason to watch this channel. I love WH13, but I… Read more »

SYFY U SUCK!!!
To the Sanctuary Team- u guys so totally ROCK! Thanks 4 the wonderful show. Heartbroken! Till the nxt great Sci-Fi. Mwhah!

Sanctuary was really the last good show syfy had left. I’ll miss it. Best wishes to the cast and crew.

Not a big fan of Warehouse 13 or Alphas, so will not be surprised / bothered when they are cancelled as well.

Obviously they needed the room to show more poor reality shows.
I will NEVER watch any of their ghost hunting, paranormal searching, creature of the weekend movies.
So basically SciFi channel is dead to me now.

Once more Syfy dumps a great show. What about the channel is even scifi anymore. It would be better named the un-reality channel.

Syfy is a joke. It was great as Sci Fi with FarScape, Stargate, BSG etc, but lately most shows on syfy are worthless. I guess that is good since I’ve cancelled upper tier cable so won’t miss anything good now.

Allow me to point out to Sy Fy or Sy Fail as i like to call them, that they will experiance a decline in vieweship, this is the last straw, you have cancelled way to many programmes, and i for one will never flick onto your Sy Fy Channel ever again, you have no one to blame but yourself.

I like to call them “Siffy,” because they sure as heck aren’t Sci-Fi.

I’ll miss it, but I’m glad it ended the way it did, when it did. Few shows get a chance to give their series a happy ending like Sanctuary did. The cancellations of The Dead Zone and The 4400 spring to mind, as does the cancellations of Caprica, Stargate Universe, and Eureka on Syfy. While Eureka will get one measily episode to wrap their entire show and plotlines up, I think we can agree that sci-fi shows, in general, get cancelled long before they can reach their happy ending. Not so, with Sanctuary, and so I’m glad.

We cancelled our satellite due to the poor programming options across several networks. Syfy in particular, with their cancellation of so many sci-fi shows, was a driving force for our decision. Apparently, fake wrestling is now science fiction according to the wizards of smart a SyFy. Good luck with that. You won’t be getting any funding from me anymore.

At least for the most part they wrapped it up pretty well to give a decent conclusion instead of the usual cliffhangers we get. It kind of makes me think they knew it was the end so finished with an ending that could be considered an ending but also allow the possibility of a renewal.

I am inclined to agree

I am going to miss this wonderful show and seeing the amazing cast. Amanda in the roll as Helen Magnus has inspired me in many things. The show is going to be missed by many. Sanctuary for all.

Another one of my fave syfy shows cancelled. Congrats comcast all you gotta do is cancel warehouse 13 and im done with you :). Enjoy the neverending reality shows. Rip sci fi